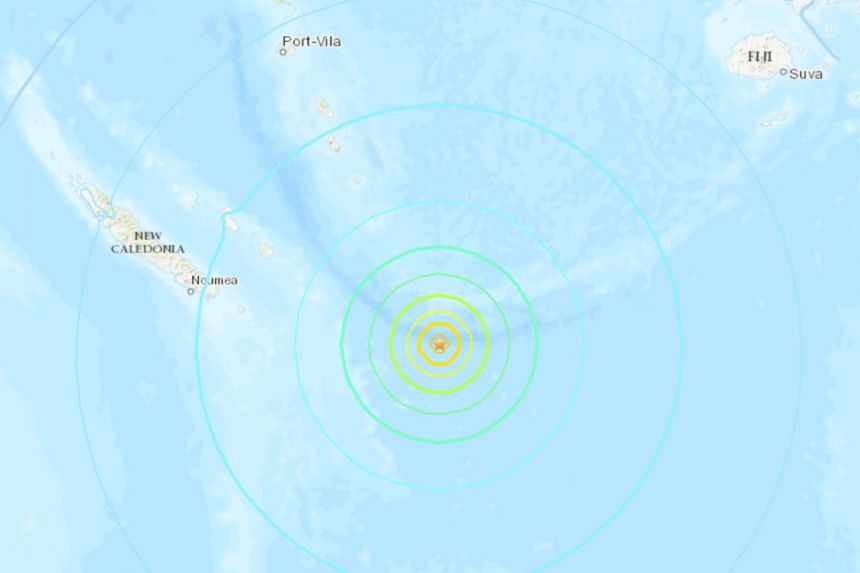 WELLINGTON/SYDNEY -- A 7.7 magnitude undersea earthquake struck the South Pacific region on Thursday, triggering a brief tsunami warning for Australia and New Zealand that was cancelled, with no immediate reports of damage.

The European Mediterranean Seismological Centre (EMSC) said the quake’s epicentre was 417 kilometres (258 miles) east of Tadine, New Caledonia, and at a depth of 10 km (6.2 miles).

Tsunami centres across the region sent alerts for the public to stay off beaches and shore areas due to risks of unexpected currents and unusual waves. Those warnings were later cancelled, and authorities said any tsunami threat to mainlands in Australia and New Zealand had passed.

“Based on the most recent modelling and decreasing tsunami amplitudes at North Cape, Great Barrier Island and the East Cape, the tsunami threat has passed for New Zealand,” the National Emergency Management Agency said in a statement.

“There could still be large unexpected currents and the public are advised to continue to take precautions in coastal zones for the rest of today,” it added.

Australia cancelled a marine tsunami warning it had issued for residents of Lord Howe Island, a marine reserve more than 700 kilometres northeast of Sydney. There was no threat to the mainland, it said.

The quake followed at least three other tremors in the region with magnitudes ranging from 5.7 to 6.1 in a span of just over an hour.

There were no immediate reports of damage near the epicentre in New Caledonia, John Ristau, a seismologist from New Zealand-based GNS Science, told NewsHub’s The AM Show.

“It’s most likely that damage would have been minimal if anything at all,” he said, adding that Thursday morning’s earthquake could trigger more tremors.

The U.S. Tsunami Warning System said a tsunami watch was in effect for American Samoa and cited a potential for tsunamis in other regions including Vanuatu, Fiji and New Zealand.

Waves reaching up to a level of 1 metre (3.3 feet) above the normal tide level were possible for some coastal areas, it added.