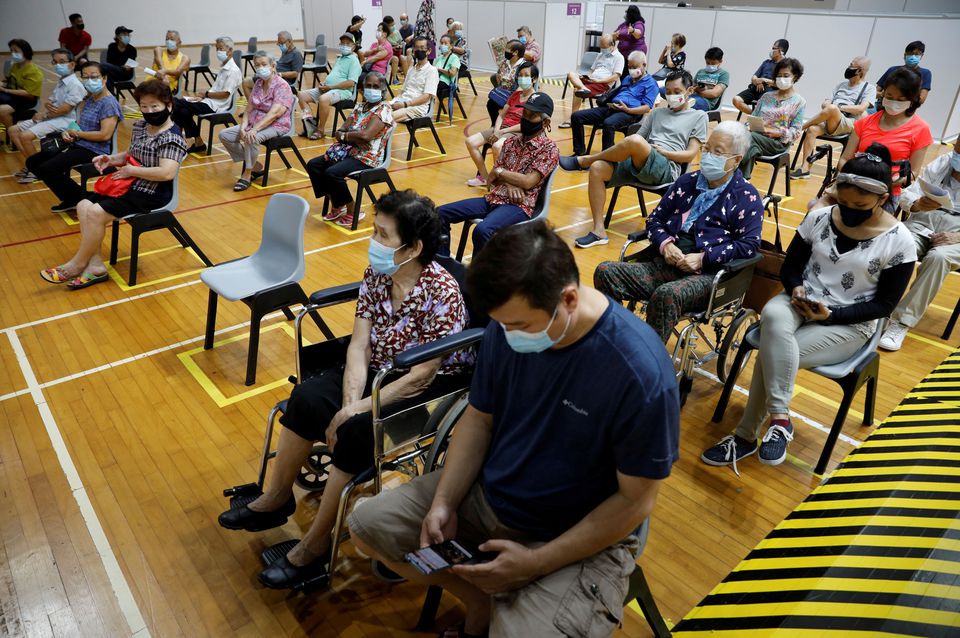 SINGAPORE -- The rapid pace of new COVID-19 infections and a doubling of seriously ill patients in Singapore have raised unexpected hurdles to reopening plans for the vaccination frontrunner, where 81% of the population is fully vaccinated.

Singapore, one of the fastest in the world to reach that level, has seen its inoculation rates plateau, and this month paused its gradual reopening plans, spooked by daily infections that returned to one-year peaks this month.

Infections over the weekend were more than a combined 1,000 cases, a tenfold increase from a month ago. Many experts, though, are not overly concerned about the rise in infections because of the low number of serious cases and Singapore's high vaccination percentage.

The number of patients requiring oxygen, however, doubled to a record 54 on Sunday from two days before, an important gauge to judge whether the medical system could get overwhelmed.

The number of patients in intensive care units (ICU) have held at a low seven. Around 300 ICU beds are available and that could be increased to 1,000.

Many nations that have kept infections low and are considering taking steps to return to some normalcy once they achieve high vaccination rates are closely watching how the situation develops in Singapore.

With most of those aged 12 and older already vaccinated, Singapore is now considering a third shot for younger adults and may start inoculating children early next year. This week it will start boosters to the elderly and immunocompromised groups.

"If by offering booster shots to the people, including young adults, Singapore is able to relax its restrictions quicker especially with respect to reopening Singapore's borders, then this may be an existential decision that the government is forced to take," said Teo Yik Ying, dean of the Saw Swee Hock School of Public Health at the National University of Singapore.

While the U.S. government introduced vaccine mandates for federal employees to fight a new wave of sickness and death caused by the fast-spreading Delta variant, Singapore is not considering such measures yet, as it has so far approved vaccines for emergency use only.

But some are voicing support for such vaccine mandates.

On Sunday, a commentary in The Straits Times, Singapore's main newspaper, said an estimated 500,000 people that were eligible but have chosen not to get vaccinated were threatening the healthcare system.

"It is the unvaccinated people who hold the key to how fast Singapore can open up," the newspaper piece said.

"Perhaps, it is time the government mandated vaccination for all who are medically eligible for it."

Singapore is trying to push inoculations higher, with teams going to the homes of unvaccinated elderly people to give them the shots. Employers have also been asked to consider vaccination-differentiated workplace measures.

Singapore's approach contrasts with other vaccination frontrunners such as Israel, the United States and England, which eased restrictions as they inoculated a large portion of their population and subsequently suffered a surge in cases and hospitalisations.

The government has said it will pause further opening for now and that it does not see a need for tighter curbs, although it has not ruled them out either.

In Singapore, the percentage of unvaccinated who became severely ill or died was 5.2% as of Sunday. For the fully vaccinated that percentage was 1%.