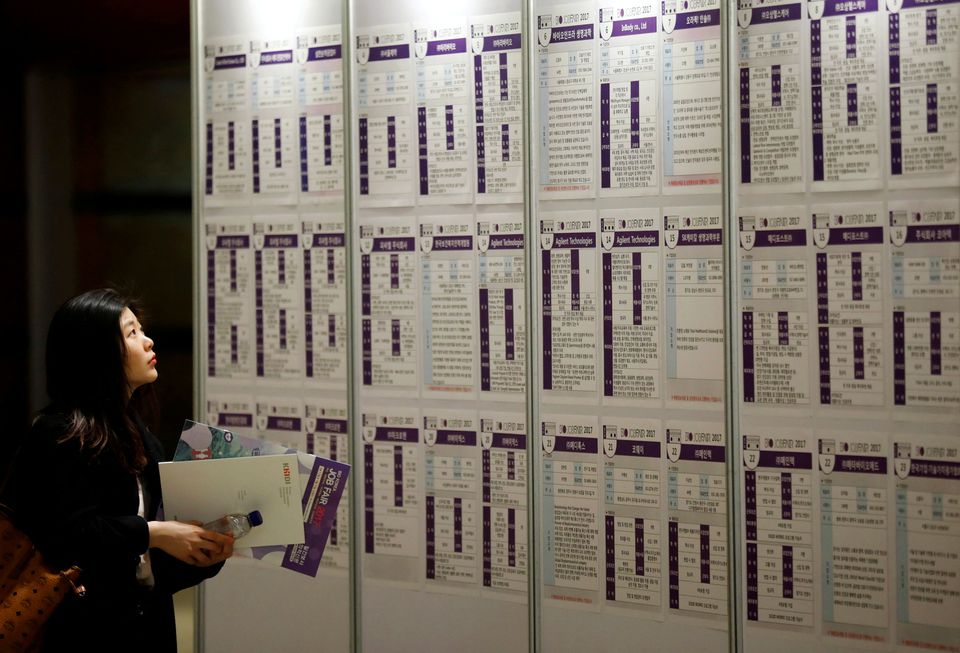 At age 69, Kim Jung-mi holds three jobs: she spends three hours getting a two-year old home from kindergarten every weekday for $9 per hour, then washes vegetables at a store that sells kimchi. Occasionally, she walks her neighbor's dog.

That kind of gig work among elderly people has helped South Korea to log a record-setting run of low unemployment through February, at 2.7%, with almost half of the job increases driven by people 60 and older.

Although the drift to low-paid, part-time work is a global phenomenon, it has put South Korea at the top of OECD's scale measuring the temporary employment rate for people 65 and older: 69% of that age group is working somewhere, far higher than 38.1% in Japan and 13.2% for the peer group average.

The heavy concentration of job increases in the elderly population shows the fragile nature of the domestic economy, experts say.

"I know I'm underpaid compared to some of younger people in the area, but where else would I go if I don't take this opportunity?" Kim said, adding that she is happy with her current jobs after other roles such as being a cleaner.

None of Kim's jobs comes with any social security benefits or the potential for meaningful wage increases. Such jobs do little to boost the country's private consumption, as many in Kim's age group are working to barely escape poverty.

It also highlights a consistent problem in Asia's fourth-largest economy, where the United Nations estimates that the share of elderly people will become the largest of any country by 2050.

The country's elderly face the highest risk of becoming suicidal, and the relative poverty rate for 65-year-olds and above in Korea is the highest in the OECD. About 45% of that age group is living on less than 50% of the median disposable income.

"Korea's people aged above 65 tend to have a higher income poverty rate compared to other major economies, partly due to insufficient coverage of the existing pension system as well as not enough private savings," Yoon said.

The demographic squeeze is not unique.

In Japan, senior citizens have become an increasingly important part of the country's labour pool, as about 13% of the workforce are 65 or older, up from 9% in 2012. More than three-quarters are part-timers filling roles such as cleaners, taxi drivers and shop clerks.

James Cho, CEO of Korean mobile platform "Pleasehelp," which connects job seekers to errand work, says many people on the cusp of retirement are just as busy as those who are in their 20s and 30s it terms of job searching.

"There is no age boundary; as long as one can use a smart phone, the elderly can also make money," Cho said, adding that there were all sorts of gigs, including catching cockroaches, staging a fight, and delivery orders.

Conservative President-elect Yoon Suk-yeol, who promised to deliver stable, private sector-led job growth, is inheriting an economy that expanded at the fastest pace in 11 years in 2021, with minimum wage at 42% higher that of five years ago.

The fast-rising proportion of the elderly population poses a growing threat to public finances, as more people need social welfare at a time when tax revenue is set to decline alongside a shrinking workforce.

"Retirement? I'm not sure if I can ever do that; I will probably be working as long as I can," Kim said.