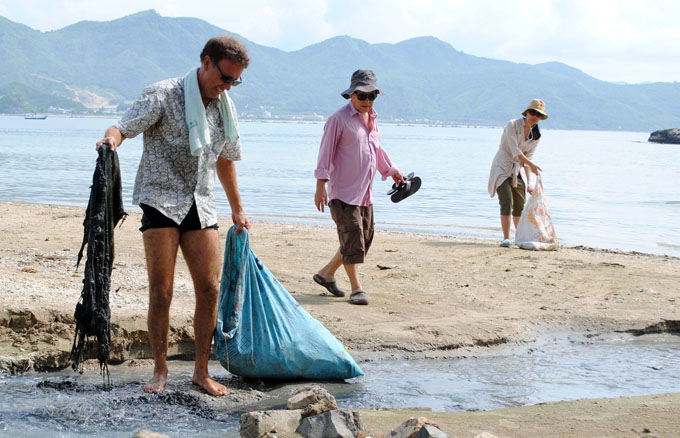 A Canadian, in his 50s, has been cleaning up a beach along Pham Van Dong Street in the Nha Trang beachside city for one month and a half now.

He collects trash dumped on the beach like plastic bags or straws, bottles, canvas and puts them into a big plastic bag that he later throws into a garbage bin nearby. “No one comes here just to collect rubbish” – Pierrot told Tuoi Tre.

“I had a habit of cleaning up the beach when I was a child because I found beaches at home were polluted” – he said.

“So I try to collect trash at all countries I’ve been to. I’m unhappy seeing lots of rubbish on beautiful beaches like in Nha Trang and Vung Tau (Vietnam), Bali (Indonesia), Rio de Janeiro (Brazil) and beaches in Thailand” – the Canadian man continued.

Pierrot said he is surprised after being told that local authorities allow the direct release of untreated domestic wastewater into the sea.

Seeing what he did, some local adults and children also joined the foreigner in collecting rubbish. “Though he comes here as a tourist, he has high awareness of environmental protection. So it is a shame if local people don’t do what he does” – Nguyen Ngoc Tinh, a local man, said.