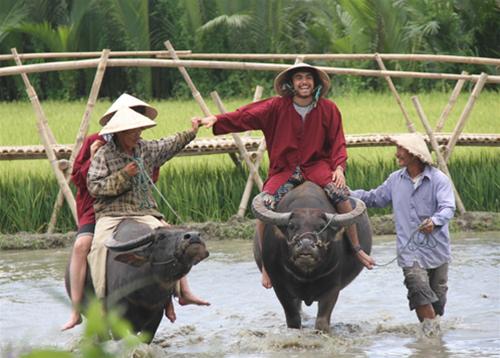 Hoi An, home to a UNESCO-recognized ancient town, recently ranked second in a list of the Top 10 Asian Cities by prestigious American tourism magazine Condé Nast Traveler. It scores high with tourists for its pristine, serene landscapes, local hospitability, and sustainable tourism development.

The city, in central Quang Nam province, earned 79.9 points in the poll, and was second only to Japan’s Kyoto, which scored 81.6 points. Nearly 80,000 readers from all over the world voted in the poll, almost double last year’s number.

According to foreign tourism experts, the ranking is quite impressive, as Hoi An is a much smaller city than other strong contenders such as Tokyo, Bangkok, and Chiangmai, and it entered the magazine’s Top 10 for the first time only last year.

Most of the magazine readers who voted for Hoi An said that they particularly love its colorful houses; imposing, ancient edifices; serene, harmonious surroundings, which send them back to the 17th century; and its friendly people.

Earlier this year, American online news site The Huffington Post selected Hoi An as one of the seven most alluring tourist destinations in Vietnam.

Ngo Tien Phong, a tour guide with Saigontourist, one of the country’s major tour operators, said that after years of taking foreign tourists to Hoi An, he has always felt their delight and contentment with the city as well as their great disappointment whenever trips to the city were cancelled due to unfavorable weather.

According to Phong, foreigners find Hoi An irresistible particularly because despite the many tourists, the local government and people have successfully maintained an ancient quarter that displays the harmony between Vietnamese, Japanese and Chinese culture and architecture.

Sivan Askayyo, a photo journalist from New York, once likened Hoi An to Venice, but with no canals or gondolas.

“I had an indescribable feeling whenever I walked along the sparkling small streets in Hoi An, lined with century-old houses which have unmistakably yellow walls and colorful lanterns. The city looks particularly gorgeous under a full moon,” Askayyo added.

Huynh Van Minh from Asian Trails Co. believes Hoi An was chosen as the top tourist destination because of the limited number of UNESCO-recognized cities in Asia and the varied tourist activities available in the area, including beach and river trips and visits to craft villages.

“These make up the city’s unique charm, so tourists don’t get bored even if they stay for one week in the city,” Minh said.

Also, from Hoi An, one can easily travel to two other UNESCO-recognized heritages: My Son relic site and former imperial city Hue.

A number of tourists said that they prefer Hoi An to other destinations in Vietnam as peddlers and service providers there rarely pester or cheat tourists.

According to Nguyen Su, a local official, what makes Hoi An most appealing, particularly to European and American tourists, is its serenity and peacefulness as well as locals’ genuine, moderate hospitality. They do not use exaggerated, fake amiability to talk tourists into buying their goods or services.

Though some two million tourists visit the city each year, the local government has stringently imposed curbs on the development of large-scale tourism services or facilities. Along with its ancient quarter, the government and locals have also kept the nearby seas, islands, and rustic scenery pristine.

“We’ve always tried to make the most of our natural and cultural resources. We hold an event called “Ancient quarter night” on an almost weekly basis instead of every month as we used to. Most buisnesses hang the special Hoi An colored lanterns, which have been increasingly known the world over,” Su elaborated.

He added that strict penalties will be imposed on peddlers and service providers who violate regulations on serving tourists. Awareness of offering good services and attitudes and ensuring stable tourism development has also been raised among them.

The preliminary findings of a recent survey by the Hoi An Department of Culture, Information and Sports revealed that out of around 1,000 expats and visiting Vietnamese, up to 67% would move there if they could and 24% believe it to be an ideal place to do business.