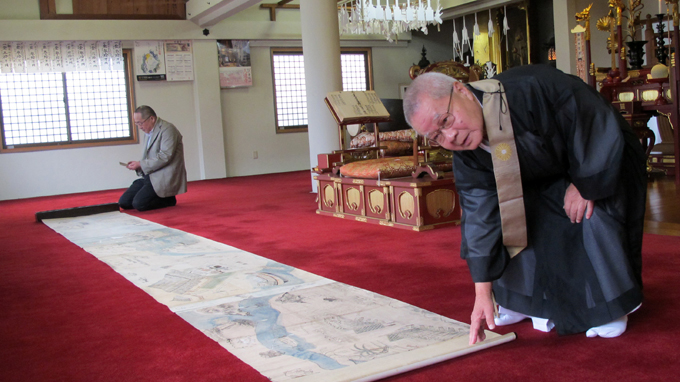 The two paintings, created in the Edo period (1603-1868), which was characterized by economic growth, strict social order, and the enjoyment of arts and culture, depict Japanese merchant ships crossing a sea and doing business with merchants in “Dang Trong.”

“Dang Trong” (Inner Half, aka Cochinchina), which contemporary Japanese called “Kochi koku,” was the area stretching southwards from the Gianh River in the north-central province of Quang Binh.

The area was ruled by the Nguyen lords, one of the two ruling families in Vietnam, during the 17th century Trinh-Nguyen civil war.

The paintings, titled “Chaya Shinroku Kochi toko zukan” and “Shuin-sen Kochi toko zukan,” are of high artistic value and are precious proof of trade conducted between the two countries in the 17th and 18th century.

They are also among Japan’s treasured items.

The unique painting describes the sea voyage made by merchant Chaya Shinroku, who crossed the sea from Japan to Hoi An Ancient Town, once a trading port in the central Vietnamese province of Quang Nam.

The work also features a scene depicting the Japanese merchant and his escorts visiting the head of Quang Nam Province.

The images on the front of the painting bear Japanese annotations, while those on the back do not.

The valuable painting skillfully depicts the Shuin-sen ship in one of its sea voyages to Hoi An.

The ship was one of the merchant ships licensed by the contemporary Japanese government to travel abroad.

The artwork also displays the ship departing from a Japanese harbor – thought by several Japanese scholars to be Nagasaki harbor – and heading for Hoi An harbor.

The “Shuin-sen Kochi toko zukan” painting, which does not bear Japanese annotations, also illustrate daily life at the Japanese quarter in Hoi An.

Shedding light on the paintings

At the international seminar titled “The Nguyen Dynasty in Vietnam: 1558-1885” launched by America’s Harvard University in Hong Kong in May 2012, Prof. Kikuchi Seiichi, of Showa University in Tokyo, delivered an intriguing dissertation on the two scrolls.

Prof. Seiichi observed that the artists who created the paintings were incredibly knowledgeable about Hoi An and its surroundings.

The artists must have stayed in Hoi An for a long time in order to capture such accurate details in their work.

Using the paintings, he and his colleagues also pinpointed the former location of the Quang Nam provincial edifice.

The Japanese professor also identified several royal members depicted in the paintings, including one of the Nguyen Dynasty’s crown princes, Nguyen Phuc Nguyen (1563-1635), his daughter, a Japanese merchant named Araki Sotaro, and his Vietnamese wife.

Meanwhile, at a seminar held in central Vietnam’s Da Nang City late last year, Prof. Mochizuki Sincho from Minobusan University stressed that apart from conducting business with their counterparts in “Dang Trong,” merchants of the Chaya lineage were also tasked by the contemporary Japanese king with examining the “Dang Trong” government’s attitudes towards Japan.