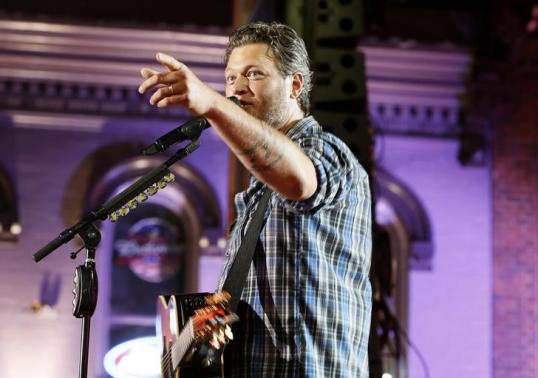 Shelton, who is also a judge on NBC's talent show "The Voice," topped the chart with "Bringing Back the Sunshine," which sold 101,000 copies in its first week, according to sales figures compiled by Nielsen SoundScan.

R&B singer Prince, who last released an album in 2010, gave his fans two new albums at once. "Art Official Age" notched No. 5, while "Plectrumelectrum," his collaboration with his backing band 3rdeyegirl, landed at No. 8.

Billboard said Prince is the first act in a decade to achieve two simultaneous albums in the top 10 of the Billboard 200 chart. Rapper Nelly last achieved that feat in 2004 with his "Suit" and "Sweat" records.

The only other new debut in the top 10 of the Billboard 200 chart, which measures physical and digital album sales, is Irish pop-rockers the Script at No. 10 with "No Sound Without Silence."

For the week ended Oct. 5, total album sales clocked in at 4.35 million units, down 9 percent from the comparable week in 2013, while year-to-date sales totaled 180.01 million, down 14 percent from last year, Billboard said.