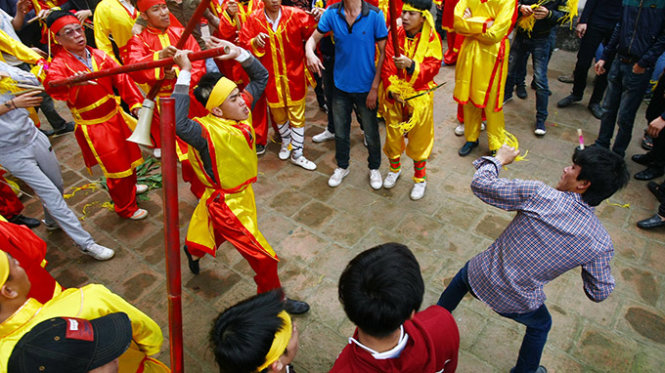 Overcrowding, fighting and rough shoving are common grievances at Vietnamese festivals, several of which have just kicked off and run for several days or even an entire month.

Though Tet (Lunar New Year), which began on February 19, is technically over in cities, the springtime festive atmosphere is far from over, with festivals of different scales blossoming across the country for several days on end, or even running until the end of the first lunar month.

As in previous years, the major festivals have each drawn thousands of visitors.

The Giong Temple Festival runs annually in Hanoi’s outlying district of Soc Son from the sixth to the eighth days of the Lunar New Year, or from Tuesday to Thursday.

On Tuesday morning, groups of outraged local youths beat each other with clubs after failing to snatch away the offering items from a palanquin procession, which is traditionally believed to bring good luck in the new year, Doan Van Sinh, head of the district’s Culture and Information Department, confirmed.

He added that hassles have been commonplace at the festival for several years, and the organizer has tried hard to combat the plague to little avail.

“The offenders are mostly youths from local villages. Though the plague has persisted for several years, we have failed to raise these youths’ awareness. This year, we have kept a close eye on them, but somehow chaos still erupted,” Sinh noted.

He added he has sent people to take photos of the disruptive youths to pinpoint their neighborhood and urge local authorities to rectify their manners.

Meanwhile, paths leading to the Yen Tu Festival, a major spring fest organized annually in Uong Bi City in the northern province of Quang Ninh, have been packed with pilgrims and tourists for the past few days even though the festival will not officially kick off until Saturday, or the 10th day of the Lunar New Year.

Progress is painfully slow at several sections of the paths leading to Yen Tu Mountain and Hoa Yen Pagoda, where part of the festival is held.

Those with tickets had to stand in queues which were over 100 meters long just for their turn to get on the cable cars.

Visitors are seen scrambling and climbing on the way to Yen Tu Mountain at the Yen Tu Festival in the northern province of Quang Ninh though the fest will not open until February 28, 2015. Photo: Tuoi Tre

Flocks of pilgrims and visitors are seen on their way to Yen Tu Mountain. Photo: Tuoi Tre

The Huong Pagoda Festival, one of the northern region’s largest, runs annually in Hanoi’s My Duc District from the sixth day of the lunar year’s first month to the 18th day of the second month, and may linger on into the third month.

This year’s fest began on Tuesday.

Nguyen Chi Thanh, head of the Huong Son Relic Management, told Tuoi Tre (Youth) newspaper that the relic received around 150,000 visitors from the third to the sixth day of the first lunar month, most of whom are on a pilgrimage to Huong Pagoda and joined the eponymous festival.

Thanh added that visitors arrived days before the festival kick-off thanks to auspicious weather, thus considerably relieving overcrowding, which was commonplace in previous years.

Boats, however, are still laden with excess numbers of passengers who are not equipped with life vests.

Pilgrims still scatter small-denomination banknotes on the way and stuff them into the grooves of rocks at Huong Tich Grotto, one of the complex’s picturesque caves.

Over 1,000 tourists, including foreigners, flocked to the Temple of Literature, believed to be the country’s first university, in Hanoi on Monday morning, or the fifth day of the Lunar New Year, for calligraphy works.

Calligraphic works are those featuring stylized words in Vietnamese, Chinese and even English, or any other language that one’s heart desires.

The words, which are mostly of educational and literary meanings, are written in a special kind of ink and with a brush.

Those trained to write the words are called “ong do” (calligrapher), and are usually older and dressed in the male “ao dai” (traditional long gown) and headdress. A number of “ong do” are in their 20s or 30s, however.

Visitors are shown thronging at the Temple of Literature in Hanoi on February 23, 2015, or the fifth day of Tet (Lunar New Year) for calligraphic works. Photo: Tuoi Tre

Many waited for an hour to get a ticket to enter the calligraphy area. A number of men also sold black market tickets to visitors.

In a similar vein, the Mekong Delta province of An Giang welcomed over 100,000 visitors each day from the first to the fifth day of the Lunar New Year, according to its Department of Culture, Sports and Tourism.

Visitors to the Cam Mountain Tourism Complex in the province’s Tinh Bien District doubled during the Tet holiday compared to numbers in previous years, as the complex recently inaugurated a cable car system.

The system worked at full capacity to cater to around 12,000 passengers each day.

The influxes caused congestion on several stretches of National Highway 91 at peak hours.

Likewise, the organizer of the Ba Den Mountain Spring Festival in Tay Ninh Province, some 100 kilometers from Ho Chi Minh City, announced an almost 30 percent rise in tourist numbers on the fifth day of Tet.

The festival received over 500,000 tourist visits during five Tet days, an over 20 percent increase compared to the same period last year.

Influxes of pilgrims and visitors are pictured at the foot of Ba Den Mountain in Tay Ninh Province, some 100 kilometers from Ho Chi Minh City, during the 2015 Tet holiday. Photo: Tuoi Tre