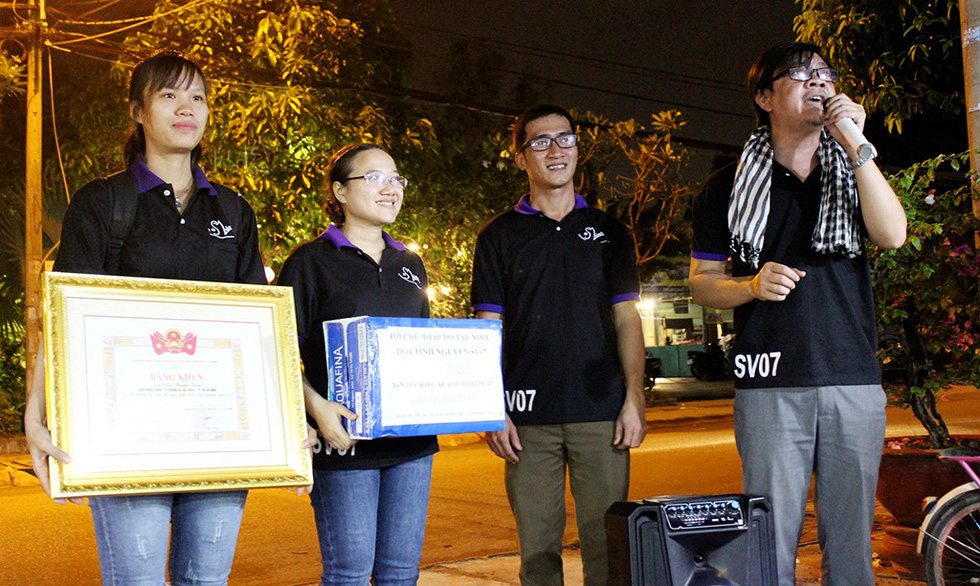 Singing skills? No way! All that matters to the SV07 charity group is that they are lending their voice to a good cause by singing at local restaurants for fundraising projects in southern Vietnam.

Ironically, those who say they’ve ‘enjoyed’ the group’s performance claim it is the worst singing they’ve heard in their entire lives.

But that doesn’t stop them from supporting the group’s good cause.

The SV07 charity group operates under the Red Cross umbrella in the southern province of Tay Ninh, about 100km northwest of Ho Chi Minh City. The province’s regions bordering Cambodia are home to some of its most impoverished families.

The ten-member group, all of whom were active members of university volunteer campaigns when they were students, heads out to local eateries to raise funds by singing whenever they hear of a patient who is in urgent need of money for medical treatment, according to group founder Chau Thanh Toan.

“We choose to sing because it is embarrassing to just simply asking for money from donors,” Toan explained, though he did admit that he is also extremely shy of singing in front of big crowds.

“I am a terrible singer so the moment I start singing people are probably scared to death,” he said with a smile.

Usually, the group will start signing at restaurants at 8:30pm and moves to different eateries throughout a neighborhood until 11:00 pm, performing songs from various genres as well as a set of ten songs composed by the group’s members themselves.

Since the group lacks talent and a proper understanding of music, they typically perform a cappella.

On performance nights, they bring a microphone, speaker, and cardboard box for donations with them as they attempt to raise enough cash to help those in need.

They also bring a certificate from the Central Committee of the Youth Union to prove their credibility to donors.

Most of the dining customers are glad to make contributions to the warm-hearted singers, but they always make sure to gentlly tease them for the lack of skill.

“Who would be giving you money with such bad singing? Are you really raising funds?” some ask before opening their wallets.

Though some offer donations as low as VND2,000, the owner of a bubble tea shop once gave the group VND50,000 ($2.2) and a free drink for each member after seeing how much effort they were putting into the cause.

Starting out with recycling

When the group was first established, they raised funds by collecting recyclables.

All ten members would collect recyclable items from early morning until the afternoon, but they rarely made more than VND600,000 ($26) per effort.

Discouraged by the lack of progress and hoping to earn enough money to help a disabled and financially struggling couple, they made the switch to singing in 2016, fully aware of their lack of talent.

The wife was pregnant and suspected her child might be diagnosed with Down syndrome, but they did not have the means to receive proper medical help for such instance.

After many late nights wandering from one eatery to another, SV07 finally managed to raise VND6 million ($260) to cover for medical expenses of having the pregnancy tested for Down syndrome

“When I introduced the group for the first time in front of a restaurant crowd, I was too timid to read more than just the introduction, even though I had already practiced two to three times,” Toan, who now works at a ward-level medical station in Ho Chi Minh City, said.

Now, the group leader can hold a microphone while slowly but confidently introducing SV07 and the causes the group is supporting.

Unfortunately, with the good comes the bad, and many times the group has been forced to deal with an unsupportive and offensive audience.

“Several times we’ve come across drunk guests at drinking restaurants who screamed at us and demand that we leave shortly after we’ve started our introduction,” Hai Nhi, who has been with SV07 for the last five years, recalled.

Other offenses the group has had to experience would include people telling them that they are wasting their time.

Even though the donations are usually quite low, SV07 once managed to raise VND7 million ($302) in just three hours when they performed at Long Hoa Market in Tay Ninh.

The money raised has had a profound impact on dozens of lives by allowing the group to build houses for the poor, buy presents and toys for children infected by Agent Orange, and support young cancer patients.

The group also prays for cancer patients in the hope that it will make a mental impact on their lives, not just a physical impact.

SV07 has also helped thousands of cancer patients at the Trauma and Orthosis Hospital in District 5, Ho Chi Minh City and Center for Orthopedic and Rehabilitation in District 3 pay for prosthetic legs, built 14 houses collectively worth VND560 million ($24,000) in total, and given away 130 bicycles.

The group also has several generous benefactors that believe in their activities and judgment.

For instance, a woman who runs a grilled chicken eatery covered all the cost of building a new house for a 13-year-old cancer patient whose mom died and father was suffering from illness. It is the seventh house to be built under SV07’s fundraising efforts.

Some of the donors also live abroad, including one in Canada that donated VND100 million ($4,310) for children infected with Agent Orange.

“I have attended many charitable events with the youngsters, so I am well aware of the innocence and their generous hearts,” one of the generous donors Le Kim Hong, owner of a diner in Binh Thanh District, said after many years of working with SV07.

“Alleviating others’ pain brings joy to these youngsters so even though each of the group members already has a job, they still hold the carton box going from diner to diner to raise funds to help the poor.”