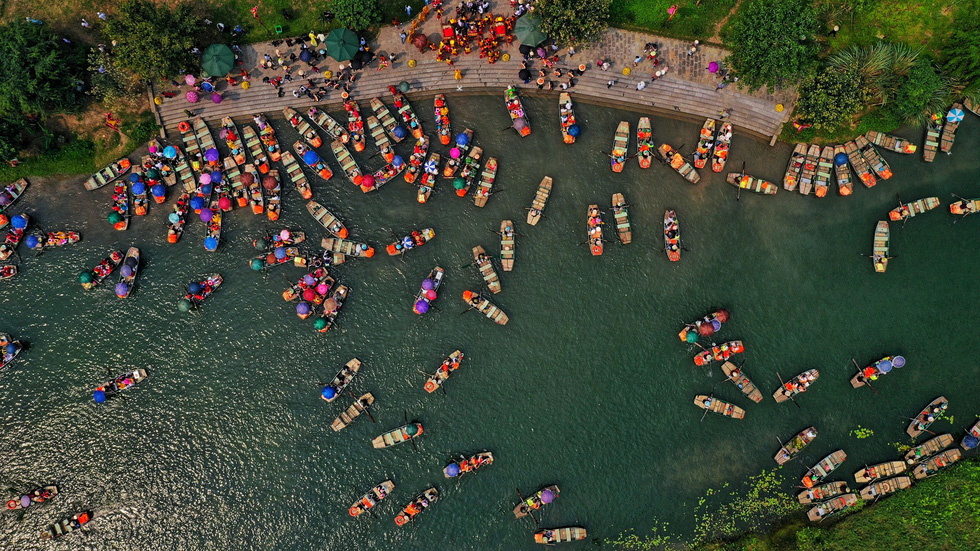 The annual Trang An Festival started on Sunday at the famous namesake tourist site in the northern Vietnamese province of Ninh Binh, attracting thousands of local residents as well as domestic and international visitors.

Themed ‘Quintessence converges on the rock kingdom,’ this year’s festival takes place at the Trang An Landscape Complex on April 21 and 22.

Despite the hot weather, more than 20,000 people participated in the first day of the event.

The annual festival is often held on the 18th day of the third lunar month to commemorate Saint Quy Minh Dai Vuong, a general under the reign of the 18th Hung King - one of Vietnam’s legendary founding fathers, as well as the Tran Kings, for their significant roles in establishing and protecting the country.

This is also an occasion for locals to pay tribute to the ancestors and pray for peace, happiness and bumper crops.

This year's event highlights the history of Vietnam under the Dinh, Le, and Tran dynasties in Ninh Binh’s Hoa Lu region, which was Vietnam’s capital in the 10th and early 11th centuries.

The fest features a variety of rituals, along with traditional musical performances from the northern provinces of Ha Giang, Bac Ninh, Hoa Binh, and Bac Kan.

Located about 100 kilometers south of Hanoi, the Trang An Landscape Complex was recognized as a UNESCO World Heritage Site in 2014.

It became a national heritage site in May 2012.

The complex is a spectacular landscape of limestone karst peaks crisscrossed with valleys, many of them partly submerged and surrounded by steep, almost vertical cliffs.

A studio within the complex, where the film ‘Kong: Skull Island’ was shot, is open free of charge to tourists throughout the festival.