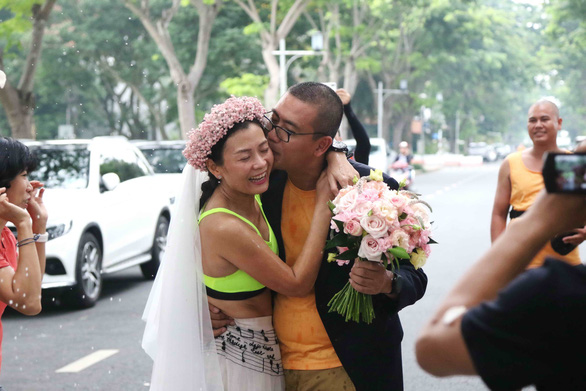 A Vietnamese couple who took part in a night marathon in Ho Chi Minh City last weekend were stunned to know that a wedding had been secretly planned for them when they both reached the finish line.

Pham Thi Hong Thuy was only 200 meters away from the finish line of the Ultra Night Marathon, an 88-kilometer race held from Saturday night through Sunday in District 7, when some ten female friends of hers ‘kidnapped’ her and had her changed into a ‘wedding gown.’

Similarly, Le Vu Tuan Anh was also stopped by a group of men to be given a bouquet of flowers for the bride when he was about to finish the race.

Thuy and Anh were then made to walk through the finish line hand in hand, with two rows of men and women standing on the other side of the line holding plates of sweets, sparkles, and wines for the celebration, just like in a traditional Vietnamese wedding.

The couple said their friends had kept them totally in the dark about this surprise wedding.

“We have known each other since 2008 but have only fallen in love recently,” the groom said.

Anh said he was truly touched and still could not believe that his friends in the running group would hold such a special wedding for him and Thuy.

“Within next week, my wife and I will complete the official marriage registration,” Anh said.

Anh said he and Thuy have many things in common; both had been through an unsuccessful relationship before they met each other, and shared a great passion for running.

The bride said the couple had been in a romantic relationship before they started running together. But it was this sport that tightened their bond, she added.

“I was surprised at this wedding, which was as beautiful as in a fairy tale, that our friends organized for us,” Thuy said.

The bride said she had insisted on finishing her race when her friends tried to ‘stop’ her.

“I did not understand what was happening and only wanted to finish the run because I was so tired,” she recalled.

“I thought Anh had already reached the finish line or gone home to rest.”

Here are some of the photos of the surprise wedding of Anh and Thuy: