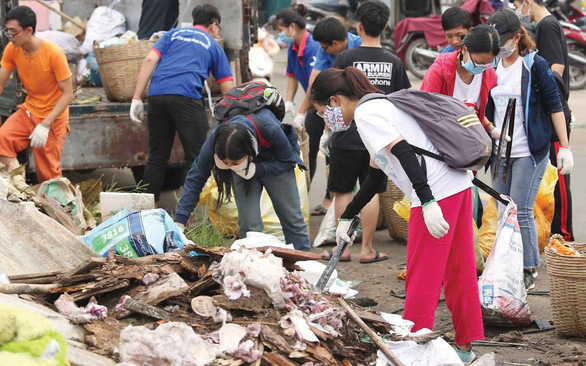 Hundreds of volunteers have gathered to clean the ground at the nearly 650-hectare campus of the Vietnam National University-Ho Chi Minh City in the namesake southern metropolis.

The waste collection was carried out by as many as 300 young members of Let’s Do It Ho Chi Minh City, an environmental non-profit organization, on a weekend before the 2020 Lunar New Year holiday at the campus in Thu Duc District.

The ‘army’ of volunteers managed to collect more than three metric tons of litter on many streets on campus on the cleanup day, attracting wide attention after pictures of the activity were shared on social networks.

As news of the activity spread, many more volunteers registered for future events led by Let’s Do It Ho Chi Minh City.

Founded in 2015, Let’s Do It Ho Chi Minh City set out with a simple goal to beautify the city, one location at a time.

Le Duy Anh, a 26-year-old man who works at a bank in Ho Chi Minh City, was inspired to establish the organization after taking part in a workshop held by Let’s Do It World in the Philippines during his senior college year.

Let’s Do It World is an international organization that tackles environmental and social problems related to illegally dumped solid waste.

Anh is convinced that it is easier to encourage people to pick up garbage than to stop littering.

Over its nearly five years of operation, Let’s Do It Ho Chi Minh City has appealed to hundreds to thousands of people in each of its events.

The organization also runs a Facebook Page with more than 15,000 followers.

It has set a target for 2020 to raise people’s awareness of collecting trash.