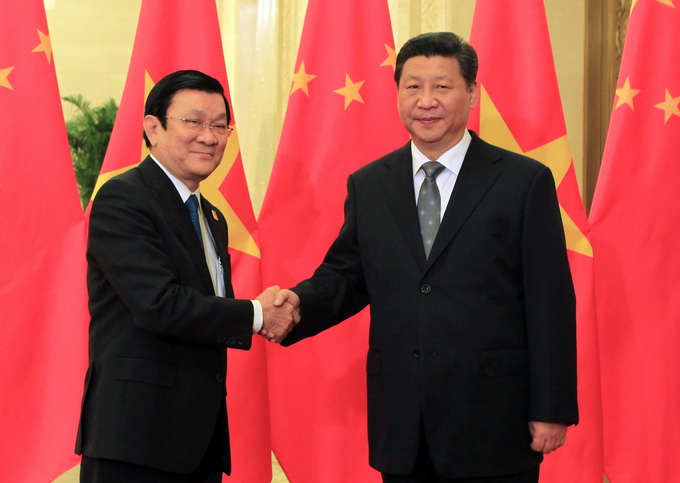 President Truong Tan Sang and his Chinese counterpart Xi Jinping have agreed to deepen their strategic cooperative partnership and resolve their differences through amicable negotiation.

The agreement was made at a meeting in Beijing on November 10 between the presidents on the sidelines of the 22nd Summit of the Asia-Pacific Economic Cooperation (APEC) Forum hosted by China. President Sang told his host that Vietnam and China have different stances on the East Sea issue, but the two sides should address the differences via negotiations and talks based on their common perception and the agreements already reached by top Vietnamese and Chinese leaders. Both nations need to maintain peace, stability, security, maritime safety and freedom while controlling disagreements and preventing the emergence of issues that could be detrimental to the bilateral ties, he said. He told his host that the two Parties and Government should strengthen mutual understanding and trust, respect each other’s legitimate interests, and implement the mutual commitments reached in the past.

The negotiations on the maritime boundary delimitation in the Gulf of Tonkin and the development cooperation in the area off the mouth of the Gulf should be stepped up, the Vietnamese leader said. In reply, Chinese President and Party General Secretary Xi Jinping said the development of relations between the two Parties and countries is appropriate with the basic interests of the two peoples and is beneficial for peace, stability and development in the region. He also proposed that the differences between the two countries should be settled amicably to create a stable and cooperative maritime environment.

He also expressed his hope that the two countries will continue their close coordination in the APEC mechanisms.

The U.S. supports a strong, prosperous, and independent Vietnam, as well as a free, open, healthy, and resilient Indo-Pacific region