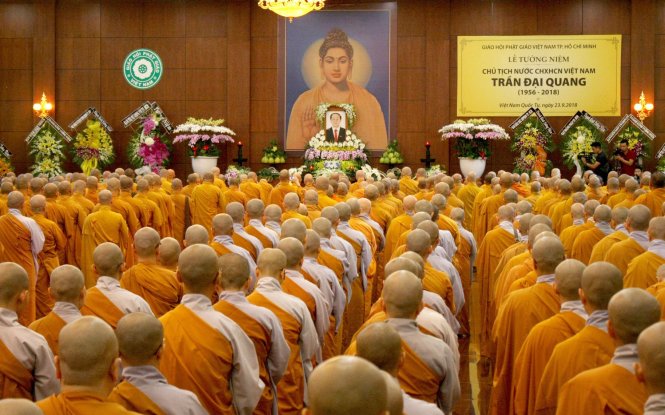 Vietnam will observe two days of national mourning to pay homage to its late State President Tran Dai Quang, who passed away at the age of 62 last week.

The mourning period will last from Wednesday through Thursday, according to a Sunday announcement simultaneously made by the Party Central Committee and other leading apparatuses, including the government, the Vietnam Fatherland Front and the National Assembly.

President Quang died on September 21 at a hospital of an illness, despite the best possible medical treatment and care from doctors, his family and the government, according to the special communiqué.

Quang received a number of medals of honor for his contributions to Vietnam and was a Communist Party member for 30 years, the announcement said, adding that his death represents an enormous loss to the country.

During the two-day national mourning, national flags will be flown at half-mast at state offices and public places, and recreational and entertainment activities suspended, according to the official Vietnam News Agency.

A praying service for the deceased head of state was held on Sunday at Vietnam National Pagoda, a large temple in Ho Chi Minh City, by the Vietnam Buddhist Sangha, a religious organization recognized by the government.

Also on Sunday, the Standing Committee of the National Assembly issued an announcement, stating that Deputy State President Dang Thi Ngoc Thinh now holds the authority of President of Vietnam.

Thinh will be the acting president until the legislature elects a new head of state, according to the document, signed by the chairwoman of the lawmaking body, Nguyen Thi Kim Ngan.