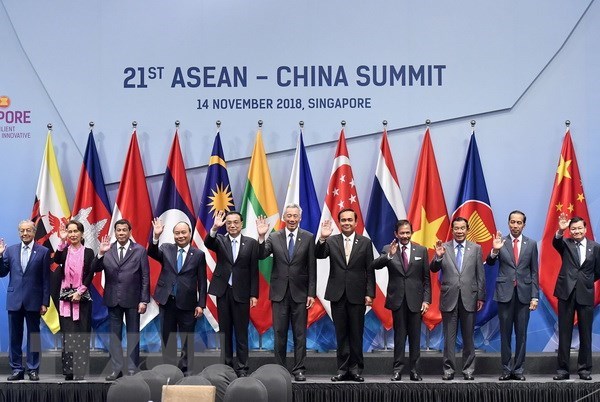 Vietnamese Prime Minister Nguyen Xuan Phuc said he supports the efforts of China and ASEAN in developing their foundation of connectivity in terms of mutual trust, physical connection, and human connection.

The Vietnamese head of government made the statement at the 21st ASEAN-China Summit held in Singapore on Wednesday, as part of the 33rd ASEAN Summit framework. The event also celebrated 15 years of strategic partnership between the two sides.

PM Phuc underlined ASEAN and China should increase dialogue efforts and collaboration, as well as build mutual trust and uphold international law, contributing to the formation of codes of conduct for an open, transparent, and rules-based regional structure, according to the Vietnam News Agency.

He underscored that ASEAN and China should continue upholding the principles they had agreed upon, which involve boosting dialogues, building mutual trust and respecting international law, especially the 1982 United Nations Convention on the Law of the Sea (UNCLOS), in the peaceful settlement of disputes.

The two sides should also avoid the militarization or complication of the situation, developing an effective and substantive code of conduct (COC), and fully and seriously implementing the Declaration on the Conduct of Parties in the East Vietnam Sea (DOC).

At the summit, ASEAN and Chinese leaders reiterated the importance of their partnership and acknowledged the strong growth of their ties based on mutual trust, understanding, and respect, according to the Vietnam News Agency.

The leaders lauded positive outcomes achieved in the ASEAN-China Year of Innovation 2018 and agreed to work together for an effective ASEAN-China Media Exchange Year 2019.

Chinese Premier Li Keqiang underlined that the positive results of cooperation between ASEAN and China have laid solid grounds for the partnership’s expansion, while speaking highly of the bloc's international role and position.

He affirmed that their principles have encouraged mutual respect for shared benefits and the boosting of win-win cooperation.

The Chinese leader said both sides should strive for stronger economy-trade-investment connection toward the goals of US$1 trillion in bilateral trade and $150 billion in foreign direct investment in 2020.

He also urged the sides to focus on upgrading and effectively implementing the ASEAN-China free trade agreement and to support a multilateral trade system of openness, transparency, and rule of law.

China announced its plan to add an additional $10 million to the ASEAN-China cooperation fund and invite 1,000 ASEAN youths to visit China.

Li also stated that China will continue working with ASEAN in completing the COC within the next three years and in fully implementing the DOC, contributing to peace, stability, safe and free navigation and overflights, and free trade in the East Vietnam Sea.