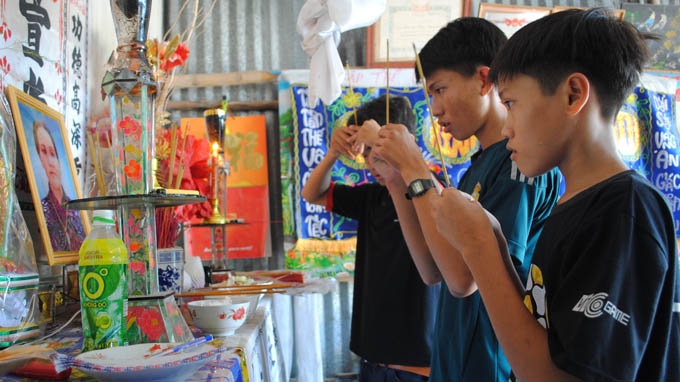 Authorities repentant about suicide from poverty

Local authorities expressed regret after Nguyen Thi My Nhan, who lived in southermost Ca Mau province, committed suicide over a week ago after trying desperately to be listed as a poor household to borrow money for her kids’ schooling.

Nhan, a 48-year-old poor, sickly woman, hung herself at her home in the province’s An Xuyen commune on Apr 24 after trying in vain for some while to obtain a book recognizing her family as a poor household from the local government.

Nhan left a suicide letter in which she wrote that she chose to die to spare her family the huge treatment fees for her acute headaches and nerve paralysis and save money for her three sons’ education.

She also stressed that hopefully after her death her husband and three sons would obtain the longed-for listing as a poor household to facilitate them in borrowing money to pay for the boys’ tuition, particularly their eldest son's university tuition.

Local authorities were shocked by Nhan’s suicide. Some are also repentant about the incident since they hadn’t done more to help her.

“Nhan’s suicide is mainly due to the mounting pressure from her financial predicament and mental crisis. However, the local government is also partly to blame as they failed to handle the case more flexibly,” said Ho Trung Viet, chair of the city’s People’s Committee.

Late last year, Nhan and her family were frustrated at not being listed as a poor household in the area, as the incomes of both Nhan and Dinh Hoai Bao, Nhan’s husband, as a domestic helper and construction errand runner totaled VND5 mil (US$237) a month, which equals VND1 mil per person a month, compared to the below VND400,000 to 520,000 (US19-25) bracket as regulated.

Nhan repeatedly appealed to the local authorities to reconsider her case, considering her acute illness. They declined and then later promised to look into it.

“The local authorities did nothing wrong, but if they had been more flexible in handling the case, Nhan wouldn’t have had such a tragic end,” remarked Nguyen Tien Hai, from the province’s People’s Committee.

Meanwhile, Truong Minh Hoang, another provincial official, pointed to it as a lack of attention and care about locals’ welfare among the local authorities.

Tran Thi Su, director of the Ca Mau Social Policy Bank, said that her bank does provide loans for such households, adding that if Nhan had received proper counseling on it, she wouldn’t have resorted to suicide.

Meanwhile Bao, Nhan’s husband said that the bank had refused to give them a loan.

He added that his family still owes VND35 million (US$1,660) to local banks and VND10 million to neighbors, while he has temporarily quit his job to take care of his sons.

Le Van Be, a local official, said the An Xuyen commune People’s Community, will look into the family’s eligibility to be listed as a poor household, now that Bao is the only income earner.