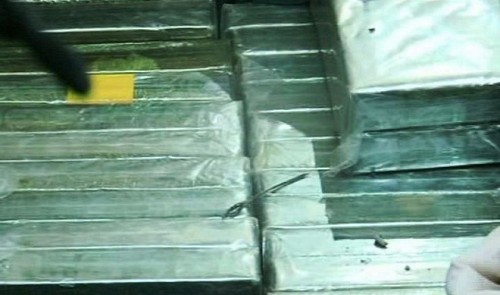 Police in Hanoi have detained two men who were caught transporting 26 heroin cakes on a motorbike. Yesterday the Ministry of Public Security issued a letter of merit to a mobile police unit in the capital for their seizure of the heroin. On May 8, a police patrol team headed by Senior Lieutenant Nguyen Dinh Cong signaled for two suspicious men riding a motorbike to stop for examination on Nguyen Huu Tho Street in Hoang Mai District. The man who was driving the bike sped up despite the police’s request. The team chased after the men and forced them to stop. While searching a backpack worn by one of the men, the team found 26 cakes of white powder, which looked like heroin. The traffic police handed the men over to anti-drug police who took samples of the powder for testing, the results of which showed that it was heroin. The drug traffickers have been identified as Nguyen Van Hien, 32, and Luu Minh Co, 37, both residents of Loc Binh District in the northern province of Lang Son. They told the police that they had been hired to transport the drugs from Son La Province to Hanoi for VND10 million (US$480) per cake. The police are working to track down the source of the drugs. In related news, on April 18 police in the northern province of Bac Giang seized 140 heroin cakes stored in a car and 80 drug pills from the car’s driver in Tan Yen District. When he was caught, the driver immediately offered a bribe to the policemen, but they rejected it. The driver then ran away but failed to escape. While searching his body, police found 80 synthetic drug tablets. They then searched the car and found a carton containing 140 heroin cakes weighing about 49 kg.