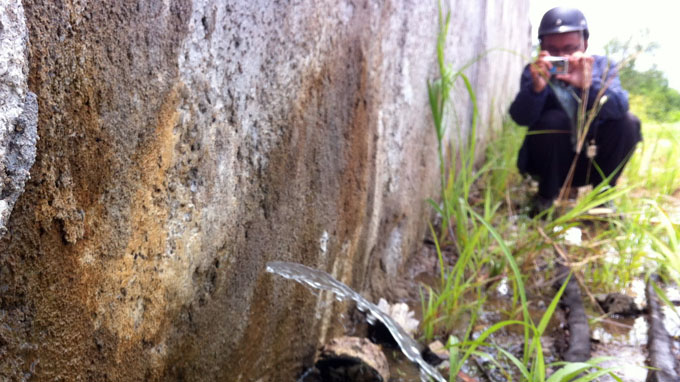 The pressure reservoir of a hydropower plant in the Central Highlands province of Dak Lak has failed during the plant’s trial run period. Meanwhile, the cause of the collapse of another plant in Gia Lai Province has been identified by its investor.

>> Dam collapses in Gia Lai, affecting hundreds of people The former plant’s engineers at the Ea Sup 3 hydropower plant in Ea Tir Commune, Dak Lak, have stepped up their repair work on the pressure reservoir after a 50 meter wall suddenly collapsed on May 26. This was the second time that the reservoir has collapsed, workers at the plant said, adding that in the previous incident, the repairs were conducted rapidly.

Le Ngoc Quy, head of the construction team of Nhat Ha Construction Co Ltd, the plant’s contractor, said the collapse occurred when the plant was operating at 75 percent of its capacity. The collapse was caused by strong pressure created by the large volume of water that suddenly flowed into the reservoir due to an incident in the plant’s water supply and control system, Quy said. The reservoir wall, which is 20 cm thick, was not strong enough to survive such strong water pressure, Quy explained. “If the wall had been built in accordance with the design, it would have been thicker. In fact, we have made it thinner to meet the construction deadline,” Quy said. The collapse could have been the result of insufficient calculations of the safety of the plant before it was put into a trial run, an expert said.  Along with the collapse, many leaks have been found in the plant’s 2.1 km long water conduit system. However, Quy refused Tuoi Tre’s request to visit the plant, saying that visit are subject to approval from the plant’s director. Nguyen Anh Dung, deputy director of the Provincial Industry and Trade Department, said the plant has yet to report the collapse. He added he would order an immediate inspection at the plant. The 6.4 MW plant was built in 2009 at an estimated cost of about VND68 billion and is expected to begin generating electricity later this year.Road rollers cause dam collapse Yesterday, after a 40 meter section of the dam of the Ia Krêl Hydropower Plant in the Central Highlands province of Gia Lai broke, police and other concerned agencies arrived at the scene to investigate the cause of the incident. According to a report from the Bao Long Gia Lai Industrial and Hydropower Joint Stock Company, the investor of the plant, the use of many road rollers on the top of the dam caused pressure that broke the water conduit system underground. Water coming from the pipelines then seeped into the dam, weakening the structure and causing it to collapse on June 12, said Bach Duc Quang, general director of the company. Quang said that the walls of the rectangular pipes are 35-40 cm thick and that “we think that with this designed thickness, the pipes cannot be damaged by pressure from trucks on the surface of the dam.” Meanwhile, the provincial Construction Department affirmed that the collapse was not caused by the volume of water contained inside the dam. At the time of the collapse, the level of water in the reservoir was 201.4 meters, lower than the limit, so it could not cause a pressure buildup large enough to break the dam’s wall, the department said in its investigative report. Concerned agencies are continuing their investigation into the cause of the incident.