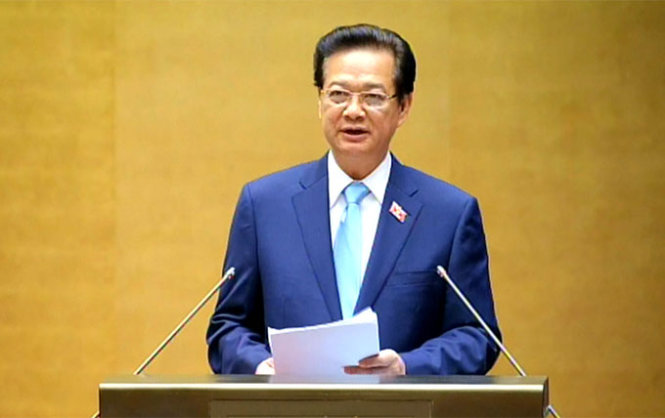 Vietnam’s debt is rising rapidly, and the country has to set aside more money from its national state budget for debt repayment, said Vietnam’s Prime Minister in a recent meeting of the National Assembly (NA) that aired on Monday.

Accordingly, the current ratio of money sourced from the state budget for debt repayments from government borrowing is equivalent to 14.2 percent of the total budget, still within the allowable limit of 25 percent on public debt management strategy, said Prime Minister Nguyen Tan Dung.

However, if one includes all of the money the government has borrowed for debt swapping and relending, about 26.2 percent of the state budget is currently set aside for all types of debt repayments, higher than the 25 percent rate allowed, said the Vietnamese Premier.

The information was offered by PM Dung in a report on the socioeconomic situation in 2014 to the NA on behalf of the government at the opening session of the 8th session of the assembly.

Though he did not give specific figures on national public debt, the head of the government confirmed that public debt, government debt and foreign debt in Vietnam are within the permissible limits.

This ratio, according to the current regulations, should not exceed 65 percent of the national gross domestic product (GDP). Vietnam’s GDP in 2013 was around VND3,584 trillion (US$170.4 billion).

According to an additional report submitted by the State Bank of Vietnam (SBV), the local banking system's non-performing loans (NPLs) reached 3.9 percent of total outstanding loans by the end of August this year, lower than previously reported.

In his opening statement, the Prime Minister said in the context of complex national and international developments, to accomplish the socioeconomic goals set for the whole year, the government always closely follows the solutions proposed by NA resolutions for monthly review and evaluation.

It is expected that the annual inflation will fall below 5 percent, while the interest rate decreased by 2 percent compared to the end of 2013, said PM Dung.

The latest date from the SBV shows that credit growth reached 7.26 percent and is expected to reach 12-14 percent by the year-end.

The national foreign exchange reserves of Vietnam also hit the highest rate ever, an estimated $35 billion, he said.

Regarding trade, exports increased by 13 percent, which also benefits the balance of trade, balance of payments and current account balance.

Implementation of FDI reached $8.9 billion over nine months, a figure which is expected to reach $12.5 billion, up 8.7 percent over the same period, by the end of 2014, he added.

The above positive signals help economic growth improve quarter by quarter, he said, adding that GDP grew 5.62 percent in the first nine months of 2014, higher than the same periods in 2012 and 2013, and is estimated to reach 5.8 percent by the end of the year.

Annualized growth in the third quarter of this year was 6.19 percent, higher than the rates of 5.42 percent in the second quarter and 5.09 percent in the first quarter, Dung said.

However, the government's report said the investment environment and business competitiveness are slowly improving, and the overall business situation remains difficult as local businesses still find it hard to access credit.

The number of local firms that are dissolving remains large.

As of September 30, 48,330 enterprises had dissolved or ceased operations, an increase of 14 percent year on year, while the number of newly registered enterprises during the period reached nearly 53,200 units, down 9 percent compared to the same period last year, according to a recent report from the Ministry of Planning and Investment.