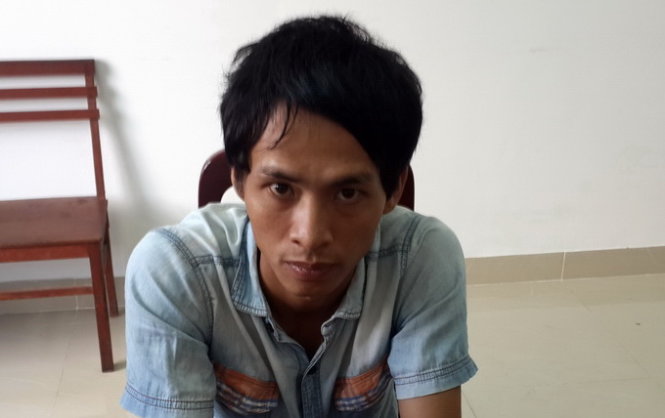 A young cold-blooded killer was arrested in early Saturday morning for stabbing a man to death and robbing him on Monday before admitting to killing three others in three separate earlier robberies, according to local police.

Tran Van Diem, 27, was apprehended around 2.30am on Saturday by the Ba Ria- Vung Tau police in the southern region while he was staying at his hideout in Ho Chi Minh City’s Binh Tan District. He was transferred to the Ba Ria Vung Tau police station later the same day, where he admitted to killing 39-year-old Nguyen Hoang Ngan, who ran a vegetarian food shop in Vung Tau City, and robbing him of his Wave motorbike on early Monday.

Diem, who hails from northern Hai Duong Province and works as a roaming massager under several pseudonyms, remorselessly recounted the details of his latest brutal killing.

As Ngan was lying on his abdomen so that Diem could apply ointment on his body before massaging him, Diem took out a knife he was carrying with him and stabbed two or three times at the victim’s neck area.

The victim managed to roll out of his mattress, but was soon strangled to death by the killer with his bare hands.

Diem then washed his hands and rummaged for Ngan’s valuables but could not find anything.

Enraged, Diem stabbed his victim another two times and swore before leaving with the victim’s bike.

The murderer left behind his bicycle and set of cupping tools on the crime scene.

According to a local police officer, while being interrogated, Diem admitted to performing three previous killings of three other men and robberies, as he said “I know I’ll surely receive the death penalty, so I admitted to all my crimes.”

His killing spree continued as he stabbed Le Minh Hiep and robbed the victim of his motorbike in central Quang Ngai Province on August 24.

The killer soon struck again, stabbing Pham Van Can to death in northern Hai Phong City on September 15 before getting away with the victim’s motorbike and cell phone.

Senior Lieutenant Colonel Le Thanh Tung, of the local police force, said the person who was found sharing the same room with Diem when he was arrested could have been the killer’s next victim.

Tung said some 20 roaming massagers in the neighborhood were summoned before the suspects were narrowed down to Tran Quang Hieu, who was later identified as Diem.

According to another officer, Diem is a homeless gambler and is always short of money.

He was constantly on the lookout for his next prey while working as a traveling massager, the officer added.