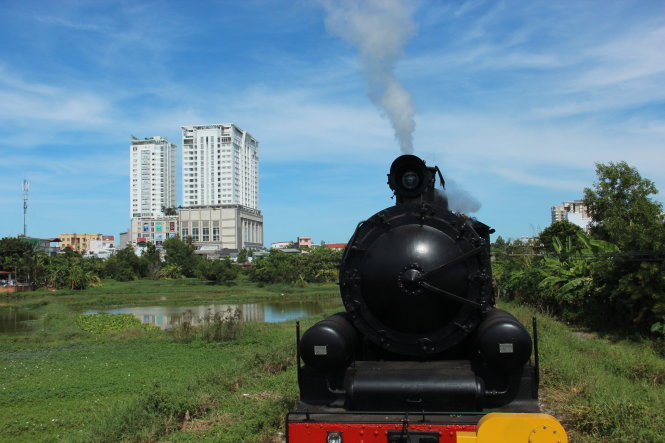 Vietnam’s first steam locomotive to be brought back to life in over half a century and to be tapped into for tourism had a smooth trial run on Sunday morning.

After the successful trial operation, the locomotive, numbered 141-190, is expected to be used in the rail route which spans over Hai Van Pass from Da Nang to Hue in the central region.

Renovation work is also performed on four age-old cars, which will accompany the steam locomotive upon completion.

The successful trial run is the fruit of an eight-month collective effort of some 20 engineers and workers of Di An Train Co. based in southern Binh Duong Province.

The team renovated the locomotive on a VND6 billion (US$282,406) order placed by Indochina Rail Co., a local railway tourism company based in Ho Chi Minh City.

According to Nguyen Van Hien, 68, the restoration project’s chief engineer, the original Tu Luc 141-190 locomotive, which was produced in China in 1966, is fueled by coal.

The locomotive produces its pulling power through a steam engine.

The locomotive operated on the Ha Noi- Hai Phong routes in the north.

According to Hien, who knew the locomotive from its very first day in Vietnam, the engine has a boiler volume of four cubic meters.

It pulls a tender which is capable of carrying 10 tons of coal and 16 cubic meters of water. This water volume is enough to pull 20 passenger wagons for 50 kilometers.

After steam locomotives were replaced by their diesel successors in 1996, the Tu Luc 141-190 locomotive was shelved at a locomotive firm in Hanoi and was soon broken down into a huge heap of scrap.

As Vietnam planned to restore steam locomotives for tourism in 2009, the locomotive and two others were purchased by Indochina Rail Co.

However, after the Tu Luc 141-190 locomotive was dismantled, the restoration project ground to a halt.

The project resumed in late 2010, with the locomotive’s components being transported to Di An Train Co. in Binh Duong for reconstruction.

According to Pham Hong Phi, director of Di An Train Co., however, his company was short on engineers and workers who specialized in steam locomotives.

The restoration project didn’t resume until February 2014 and completed in late October.

Tran Dinh Hung, the project overseer, said his team restored and reassembled around 3,000 components in order to bring the engine back to life.

Another steam locomotive, which was also transported from Hanoi for assembly and restoration, is also being worked on at Di An Rail Co.