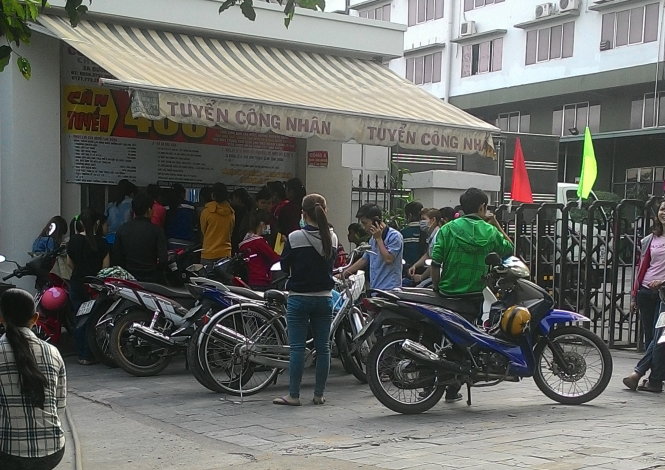 A large number of workers have been on the hunt for jobs following Tet (Lunar New Year), with their fingers crossed that their new jobs will fare better than those of last year.

The numbers of direct and online job seekers have seen rises in the past few days, with sharp increases reported by popular job-seeking websites.

Companies, particularly those at industrial and processing zones, have also recruited anywhere from hundreds to thousands of new labor, mostly unskilled workers.

In the past few days, hundreds of people have applied for jobs at Dong Hung Co. in Song Than Industrial Park, located in the southern province of Binh Duong.

The company is currently recruiting around 2,000 female workers.

Many were concerned they might not be recruited, as there are merely around 400 vacancies for workers.

Nguyen Thi Duyen, who hails from the central province of Quang Ngai, said she has filed applications at a few companies to boost her chances of landing a good job.

Phan Thi Hang, from the northern province of Thanh Hoa, asked her cousin to bring her to different businesses within Song Than Industrial Park to collect application information.

She lamented that she also worked at a company within the industrial park last year.

The company encountered financial difficulty at the end of the year and laid off a number of staff, including Hang, who had her social insurance held in arrears.

She took a coach from her hometown back to Binh Duong Province as early as the third day of the Lunar New Year to begin her job quest.

“We do thorough ‘research’ hopefully to avoid the grim prospect of layoffs and overdue pay due to stagnant business as last year,” he explained.

While many received sumptuous Tet bonuses, a substantial number of workers were vexed by having months or even an entire year of salaries held in arrears, and thus had a meager Tet celebration, or none at all.

Many were promised remuneration again and again, but they received no or only parts of their salaries for several months on end or even up to a year, and no social insurance or other allowances.

According to Tuoi Tre (Youth) newspaper’s observation, several businesses are currently looking for between 1,000 and 2,000 workers, mostly unskilled ones, in footwear, food processing, plastic, packaging, and construction.

Thirty-five and 40 percent are for unskilled and trained workers respectively, with the remaining 25 percent for college and postgraduate applicants.

Job-introducing websites have also seen sharp rises in the number of applicants in recent times.

JobStreet.com’s statistics reveal that the number of applicants on the website soared on February 22, which was fourfold that of the previous day.

The number has risen by 124 percent compared to that recorded on the days ahead of Tet.

Some other job-seeking websites, including careerbuilder.vn, have also reported increases in the number of applicants.