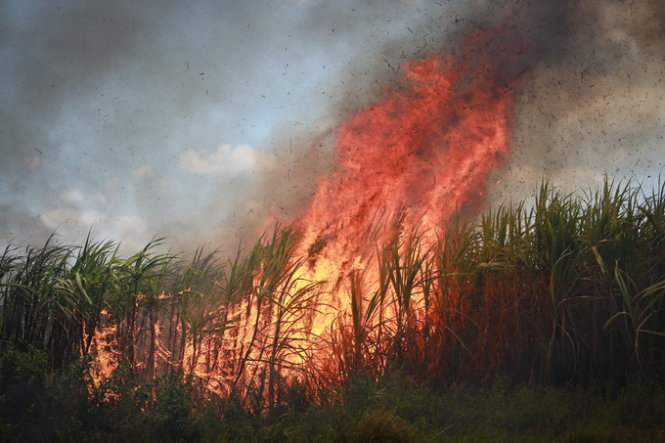 Many farmers in south-central Vietnam have felt powerless to fight raging fires and save their sugar cane fields since the beginning of the dry season.

Vast areas of sugar cane fields in Ninh Hoa Town, located in Khanh Hoa Province, have been relentlessly engulfed in flames though it is just around the outset of the hot season, which typically begins from early March to August each year.

According to preliminary statistics, as of the end of March this year, over 50 hectares of sugar cane in the town has been consumed by blazes, which caused damage worth a total of some billion dong. (VND1 billion ~ US$46,603.)

Sugar cane fields in Ninh Tay, Ninh Sim, and Ninh Xuan Communes in the town have been hit the hardest by fire.

Such blazes, which easily spiral out of control on an extensive area, are an imminent, omnipresent hazard during the dry season.

Most farmers are not armed with specialized firefighting kits, though.

They mainly gather other farmers and workers to help put the fires out by using wet clothing or pesticide sprayers containing water.

A local farmer looks fatigued and desperate after trying to extinguish a fire. Photo: Tuoi Tre

Residents from Ninh Sim Commune in Ninh Hoa Town make use of their home-made kits to stop a blaze from spreading. Photo: Tuoi Tre

Burned sugar cane crops have their sugar content reduced, which in turn causes their prices to drop.

Farmers have no other choice but to hire workers to harvest the canes shortly after each fire to minimize losses.

A farmer told Tuoi Tre (Youth) newspaper that he loses around 10 metric tons of sugar cane per hectare of fire-ravaged field.

Most of the blazes have been triggered by wildfire, farmers’ practice of smoking out and catching mice, and burning leaves, or are sometimes the consequence of arson due to personal conflicts, a supervisor of a sugar company explained.

Meanwhile, the director of another sugar company pointed to lengthened scorching heat as another culprit of sugar field fire.

Two women are seen rushing to put out a fire in their sugar cane field. Photo: Tuoi Tre

Within less than half an hour, a fire spread to several adjacent sugar cane fields in Ninh Tay Commune. Photo: Tuoi Tre

Farmers in such provinces as Ninh Thuan and Khanh Hoa in the south-central region, Dak Lak and Gia Lai in the Central Highlands, have fretted over the alarming drought that has shown no signs of abating.

They are desperately seeking water resources to irrigate their withering field crops and quench their own and their cattle’s thirst.

A 13-year-old girl, whose face is smeared with smoke, is paid VND1,000 (US$0.05) for each bundle of burned sugar cane she harvests. Photo: Tuoi Tre