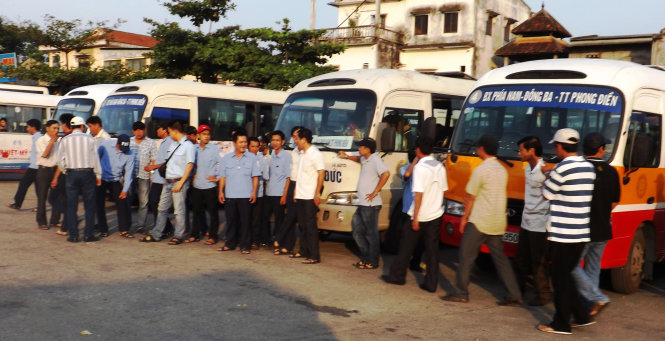 Passengers of bus routes in the central province of Thua Thien-Hue were upset on Thursday since over 70 bus drivers went on strike, badly affecting the daily activities of people in the locality.

Numerous bus routes in inner Hue City and from Hue to other districts in the province were paralyzed today because of the strike.

Hue is the capital city of Thua Thien-Hue Province.

Many people were late for work and school when the drivers started their strike from early this morning till 4:00 pm today.

The drivers said they decided to go on strike because they were not given labor contracts and therefore had no social and health insurance. The drivers also complained that they were given low salary rates.

The drivers belong to Hoang Duc Company, which manages 33 buses on six routes in the province.

Before, the drivers belonged to the state-owned Thua Thien Hue Bus Company, and were transferred to Hoang Duc last month after the company won a bid to operate public transport in the locality.

Pham Quang Hong, head of the transport management unit under the Thua Thien-Hue Department of Transport, today instructed the company to ensure the basic interests of the drivers.

Hoang Duc director Hoang Duc Hoai argued that the drivers have been working for the company for just a month.

They will be satisfied after the company becomes more stable, Hoai said.