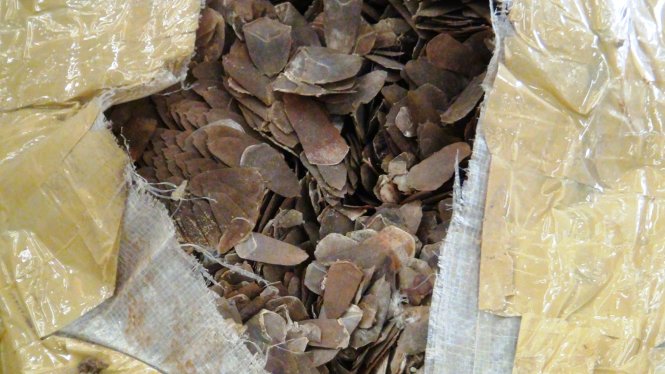 Customs officers at Tan Son Nhat International Airport in Ho Chi Minh City on Sunday said they had discovered 42.2kg of pangolin scales hidden in the luggage of a passenger.

The scales of this endangered wild animal species were found in a package declared to contain personal effects on board a flight from Nigeria.

The flight had transited in Turkey before arriving in Vietnam on Saturday, customs officers reported.

In August 2013, customs officers in the northern Vietnamese city of Hai Phong seized 6.2 metric tons of live pangolins stashed in a 40-foot container shipped from Indonesia.

As shown in the customs declaration for the shipment, the goods inside were fish, fish bones and fish stomachs, but after an inspection customs officers at the port detected the fraud.

All eight varieties of pangolin feature on the International Union for the Conservation of Nature’s Red List of animals threatened with extinction, and two are critically endangered, The Telegraph reported.

Trading in pangolins is banned by the Convention on International Trade in Endangered Species of Wild Fauna and Flora, an international agreement to which Vietnam is a party.

Despite the ban, pangolin populations have suffered from illegal trafficking due to unfounded beliefs in Asia that their scales can stimulate lactation or treat cancer or asthma, according to Dan Challender, an expert in the species at the University of Kent in the UK.