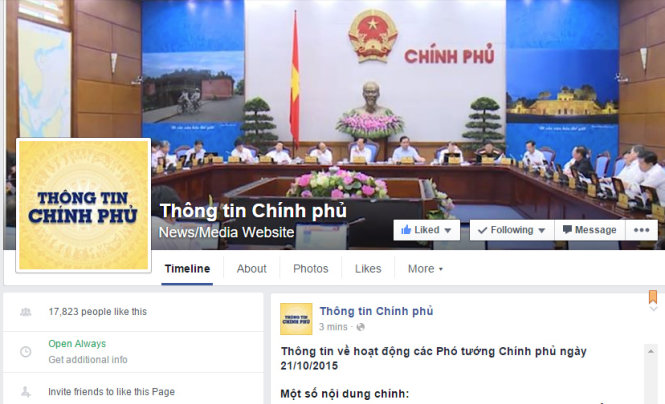 The test run of the new government Facebook page aims at supplying existing press information, also available at chinhphu.vn, to a wider Vietnamese audience, the head of the government's website has said.

For a long time, the portal of the government has sent emails containing information about its directives and administration, the prime minister, and other deputy prime ministers to press agencies and journalists specialized in monitoring governmental activities and the Government Office, Vi Quang Dao, general director of the government's website, told Tuoi Tre (Youth) newspaper.

However, the media have used only a fraction of the press information according to their needs, while other information, which may be useful to other people, has been omitted or not fully published, Dao added.

Therefore, the government portal has begun the trial to bring all the available press information on Facebook to disseminate it more broadly so that more Vietnamese people can have access to it, he added.

But it seems the government does not see this Facebook page as an official channel.

A Tuoi Tre source in the Government Office has confirmed that at the moment there are no official documents issued by competent agencies on the creation of an official channel of the central government and the Vietnamese leadership on Facebook.

However a resolution on e-government has been ratified, and there is content on establishing a governmental presence on social networks so that people can consult in the process of preparing legal documents.

In March, the Vietnamese Ministry of Health announced the official Facebook page of Minister Nguyen Thi Kim Tien, who uses it as a channel to provide information and receive questions regarding healthcare from the public.

In January this year, at a meeting to review the past performance of the Government Office and discuss tasks for 2015, Prime Minister Nguyen Tan Dung said that officials should provide the public with official and accurate information in a timely manner on social media, as it is impossible to ban people from uploading information to social networking sites.