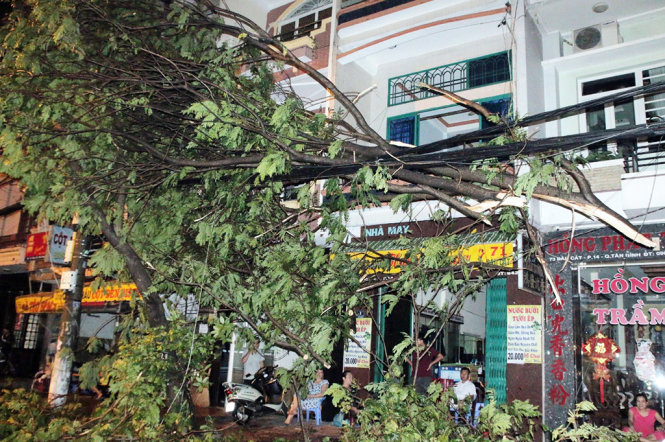 A series of heavy rain accompanied by gale-force winds lashed areas in Ho Chi Minh City on Saturday afternoon, sweeping and uprooting many trees along streets in Vietnam’s southern hub.

The 5:00 pm torrential rain sent chills down the residents’ spines in Tan Binh District, especially those living on Bau Cat, Bau Cat 1, Bau Cat 2, Nguyen Thai Binh streets as it rooted the trees up, causing branches and trunks to fall onto nearby power lines.

Traffic, electricity in many areas were heavily affected, locals said.

“The rain began gently at first, but suddenly rampaged the whole area with rapid gales and squalls, hammering the trees onto the electricity lines, blacking out the region,” Thanh Hoang, a resident on Bau Cat Street, recalled.

“Some people travelling outside had to rush into nearby houses to take shelter,” he added.

According to eyewitnesses, while trees were axed by the climatic event, many motorbike drivers on Bau Cat Street fell to the ground due to the strong gusts, leaving the traffic in chaos.

Police were sent to control the traffic, while workers of a local public service company and local power firm were dispatched to clear the fallen trees and to fix the power lines.