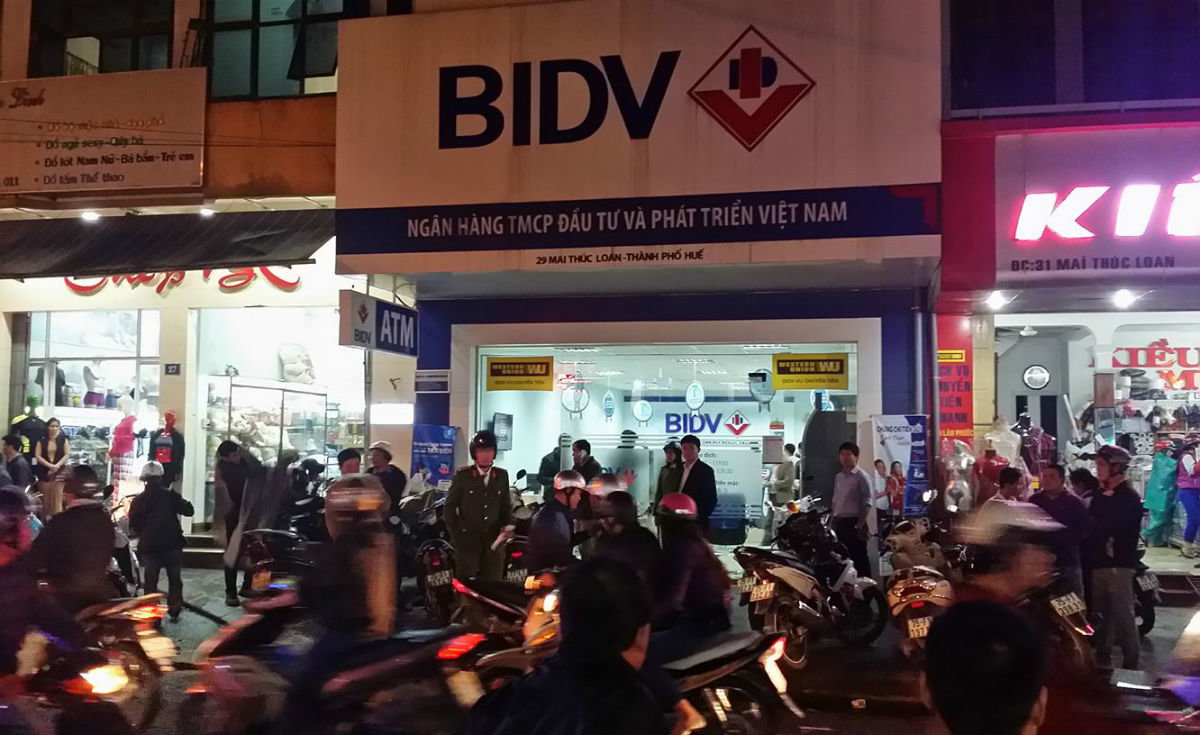 Police in the central Vietnamese province of Thua Thien-Hue are hunting for a suspect who robbed a local bank with a BB gun on Tuesday evening.

The robbery took place at a branch of the Bank for Investment and Development of Vietnam (BIDV) on Mai Thuc Loan Street in the provincial capital of Hue.

At around 5:00 pm, a man wearing a facial mask charged into the branch, threatening the bank employees with his weapon and taking away a total of VND725 million (US$32,078).

That it was an armed robbery caused many witnesses to panic while no one dared to resist the suspect.

After the masked man left the bank with the cash, a security guard and a bank staffer pursued him while calling for help.

Following a 50-meter chase, the robber fired two shots at the pursuers and managed to escape. No one was injured by the gunfire, however.

The incident also resulted in traffic jams on nearby streets as curious by-standers were filling the area.

Authorities probe the scene of the robbery. Photo: Tuoi Tre

Police officers have been tasked with hunting down the suspect while the section of Mai Thuc Loan Street has been barricaded to facilitate their investigation.

Competent agencies found several objects suspected to be the bullets of the BB gun.

During an interview with Tuoi Tre (Youth) newspaper on Wednesday, Colonel Le Quoc Hung, director of the Thua Thien-Hue Department of Police, confirmed that officers were trying to identify the suspect based on footage from security cameras installed at the bank and nearby shops and residences.

The man was about 1.7 meters tall, wearing a mask, a black leather jacket, and a helmet, and riding an SYM Attila scooter, Col. Hung said.

According to a representative of the bank, the robbery did not affect any transaction while activities at the venue have resumed since Wednesday morning.