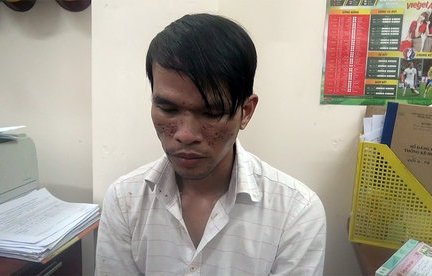 A suspect in custody for allegedly torturing and raping a child blamed his actions on the influence of meth during an interrogation with Vietnamese police on Thursday.

Shortly after his arrest on Wednesday by C45, the criminal police unit under the Vietnamese Ministry of Public Security, Nguyen Thanh Dung was taken to the ministry’s southern headquarters for investigation.

The 34-year-old man, from the southern province of An Giang, was the fourth suspect identified by police in the Cambodian province of Kompong Cham for raping and abusing a two-year-old Cambodian toddler.

Prior to Dung’s arrest in Vietnam, the other three suspects, a Dutchman and two Cambodians, were taken into custody by Kompong Cham police.

According to officers, Dung appeared calm during yesterday’s interrogation with Vietnamese police, admitting that he is the man in the child-torture videos that surfaced online earlier this week and were met by widespread uproar.

In one of the videos, Dung appears to hit a naked boy before torturing him with a stun gun and strangling the child.

Police say the investigation will continue until they identify when the footage was filmed and how many abusive interactions Dung had with the child.

Dung also admitted to being in an intimate relationship with Stefan Struik, the Dutch suspect arrested in the case and CEO of Kamkav, a company with cocoa plantations in Mondolkiri and a palm sugar plant in Kompong Cham.

Dung said Struik had given him some money to return to Vietnam and open a company, but the two still keep in touch and maintain a sexual relationship.

The suspect underlined that neither he nor his partner had sexually abused the toddler. “We are still working with Cambodian police to verify this aspect of his testimony,” a C45 officer noted.

Dung also confessed to police that the victim in the video is one of the twin sons of a couple employed on Struik’s cocoa plantation. Dung said the crimes took place when the couple asked him to babysit the child.

He also claims he may have been under influence of meth and lost control of his behavior during the horrific event.

Dung said he feels remorse of his actions and has tried to commit suicide twice since the videos but failed in both attempts.

The suspect said he felt hurt by the shouts and cries from the toddler while he watched the video at the police station.

A C45 officer said Dung has only made initial testimonies and police are working to verify his confession.

“Judging from his appearance, Dung displays no signs of being a heavy drug user,” the officer said.

In the meantime, C45 head Ho Sy Tien said Vietnamese police have yet to make plans to extradite Dung to Cambodia as local police still must “work with him to clarify some details.”