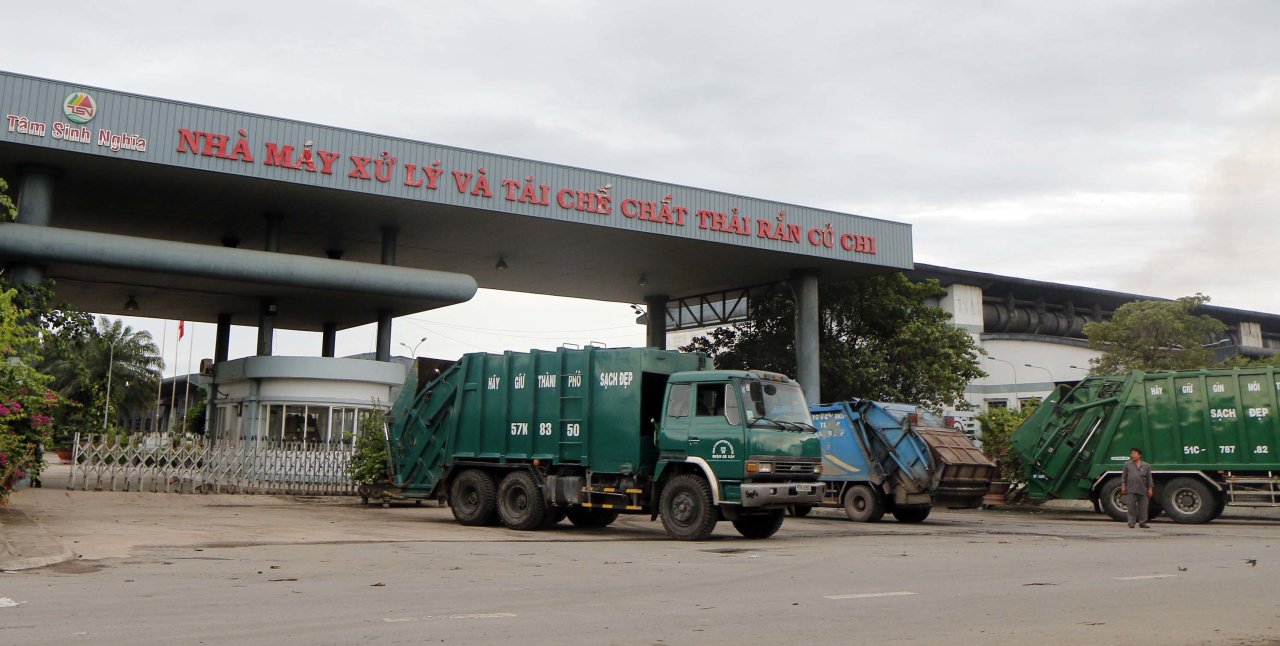 A company in Ho Chi Minh City has raised serious concerns after being caught burying a large amount of untreated garbage without permission from authorities.

A recent probe by Tuoi Tre (Youth) newspaper has revealed that Tam Sinh Nghia Investment Development JSC has been burying solid waste in an area within the Phuoc Hiep waste treatment complex in Cu Chi District, about 100 meters away from the company’s headquarters.

The firm was tasked with the incineration and recycling of the city’s rubbish at US$20 per metric ton, but had no authority to bury waste.

The clandestine activity often began late in the evening and ended the next morning.

At the burial site, several two to three meter deep holes were dug up before trucks took turns dumping the mostly household trash.

The daily operation concluded once the soil was back-filled into the garbage holes.

The location belongs to a project by the Management Board for Solid Waste Treatment Complexes (MBS) under the municipal Department of Natural Resources and Environment.

Tam Sinh Nghia trucks were allowed access to the area after MBS put the company in charge of filling the site with fertilizer and mulch, where trees were expected to be planted in the future.

Speaking with Tuoi Tre, Ngo Thanh Duc, deputy head of MBS, said that the process had been supervised around the clock, and that there was no evidence that Tam Sinh Nghia had buried trash in the area.

Duc refused to make further comment after reporters said that they had proof of a secret waste-burying operation.

The evidence reveals that Tam Sinh Nghia has not been filling the land with mulch as claimed, with the surface of the soil full of plastic bottles, plastic bags, and other kinds of household waste.

The air around the area also reeks unbearably.

Journalists discovered that Tam Sinh Nghia received up to 1,300 metric tons of garbage every day for incineration and the production of compost.

However, the firm has not been able to treat all of the trash it receives, resulting in large piles of rubbish on its premises.

Following a report from Tuoi Tre, Truong Trung Kien, head of the Urban Committee under the municipal People’s Council, investigated the situation on Tuesday afternoon.

During an interview with Tuoi Tre on Tuesday, Ngo Xuan Tiec, general director of Tam Sinh Nghia JSC, confirmed that they were burying mulch at the site.

The material is not compost, but is effective in improving the soil, Tiec said, adding that the firm had sold this type of mulch to many farmers.

Mulch is produced from rubbish after undergoing several processes including classification, deodorization, and recycling, the general director elaborated.

Regarding the discovery of the journalists, he admitted that there was untreated trash among the mulch, adding that he had worked with his employees to clarify the issue.

“It could have been a mistake. Our employees, who could have been exhausted from working night shifts, might have mistakenly loaded the untreated garbage instead of mulch onto their trucks,” Tiec explained.

Regarding responsibility, Tiec asserted that he, as leader, should be blamed for the mistakes of his employees.About 3,000 metric tons of mulch has been used to fill the land in question within the MBS project, he added.

However, he said that MBS should also be held responsible for letting trucks carrying untreated waste into the burial site.

“The final decision will depend on the authorities. I feel ashamed given the situation has been reported by the media,” Tiec stated.

With regard to the piles of rubbish on the company’s premises, he said that the material was non-classified mulch pending further treatment.

The People’s Committee has approved the construction of a VND5trillion ($221.9 million) waste-to-energy factory at Tam Sinh Nghia.

Upon its completion in about two years, this type of basic mulch will be the input material for the technology, Tiec said.