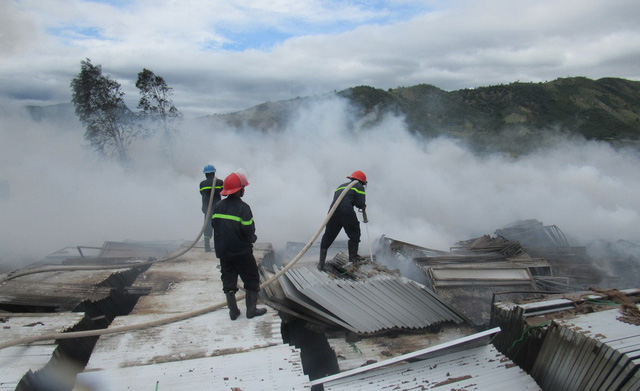 Over 30,000 solar panels were ravaged after a fire broke out at a solar energy firm in the south-central Vietnamese province of Khanh Hoa.

About 34,000 brand new solar panels were destroyed by the flames.

A Tuan An employee discovered the fire at around 7:30 am and immediately notified the local fire department.

About 10 fire trucks were dispatched to the facility and nearly 200 people, including officers and local residents, worked to extinguish the blaze.

Despite their best efforts to keep the fire under control, strong winds and a far distance from water sources kept the flames alive until 1:30 pm that day.

Around 34,000 solar panels were destroyed by the fire, with damages estimated at more than VND30 billion (US$1.32 million).

An initial investigation identified local residents burning garbage at a nearby site as the cause of the fire.

According to Vo Duy Duong, a project manager of Tuan An Company, the solar panels were meant to be installed at a local 10 megawatt solar energy project worth over VND400 billion ($17.6 million).

Tuan An was chosen as the developer by the provincial People’s Committee in 2016.

They were expected to be installed in September that year, however the project was postponed due to site clearance problems.