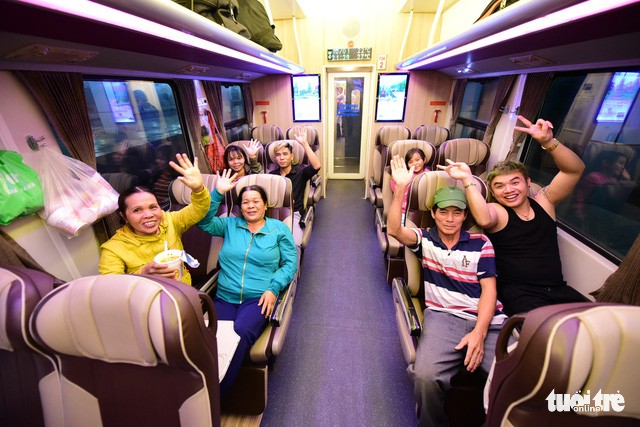 The Vietnam Railways on Wednesday officially put into operation six modern trains for the country’s north-to-south route, which runs from Hanoi to Ho Chi Minh City.

The locally made trains consisting of a total of 90 cars are part of a project worth VND957 billion (US$42.1 million).

Thanks to modern technology and high-end material, vibration is kept at the minimum during train journeys.

The area inside each carriage is also widened, offering more walking space for passengers.

The sleeping cars are equipped with imported cotton mattresses, while each passenger is provided with a reading lamp and USB charger.

Meanwhile, seats in regular cars are designed to provide more comfort with suitable lean angle and leg rests, along with chargers.

TV screens are installed inside each of these carriages for entertainment.

Statistics show that about 1,000 train cars are being used for railway activities in Vietnam.

The carriages were imported from different countries across the world, many of which have been used for 20 to 40 years.

The Vietnam Railways has had new train cars manufactured in the past two years in order to improve service quality.

From January 10, meals, whose quality is similar to airline foods, will be served on the new trains.

During the pilot phase, passengers are provided with free-of-charge meals.