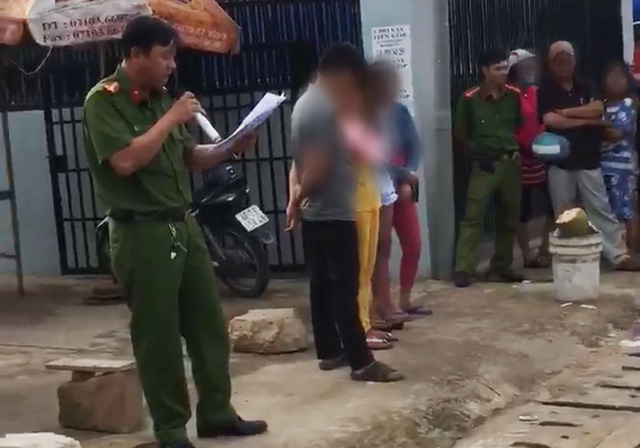 A group of policemen on Phu Quoc Island off southern Vietnam are drawing legal concerns for their public shaming of four locals busted for committing prostitution.

A clip of the incident was posted on Facebook receiving an overwhelming backlash.

The policemen in question could face charges of humiliating other people, according to legal experts.

The incident happened on Monday in Phu Quoc’s Duong Dong Town, when three sex workers and a client were forced to stand in public as an officer read aloud the minutes of their alleged violation using a loudspeaker.

Their full name, age and place of residence were made public to a large crowd of onlookers, along with a detailed and uncensored description of what they had been doing just before the police raid.

The public shaming was filmed by the audience and later uploaded on Facebook, where the footage attracted a drove of negative comments denouncing the officers for violating the four’s right to inviolability of human dignity, which is protected by the Constitution.

According to Tran Thi Thu Ha, a lecturer at the University of Law in Ho Chi Minh City, the act of committing prostitution is not considered a criminal offense in Vietnam, and sex workers as well as clients only face administrative penalties when they are busted.

However, there is no available law or regulation that states that sex workers are to be publicly named and shamed for their violation.

“The fact that these policemen read aloud the four individuals’ wrongdoings in public is therefore a violation of the law,” Ha explained.

Meanwhile, a procurator from a district procuracy in Ho Chi Minh City asserts that the policemen could face charges for humiliating other people, according to the Penal Code of Vietnam.

“Those who are shamed could demand investigations by competent authorities into the officers’ abuse of powers and positions to violate their right to human dignity,” the procurator said.

Colonel Le Van Mot, police chief of Phu Quoc, said he had requested a full report on the issue from the Duong Dong Town police division, based on which appropriate measures would be taken.