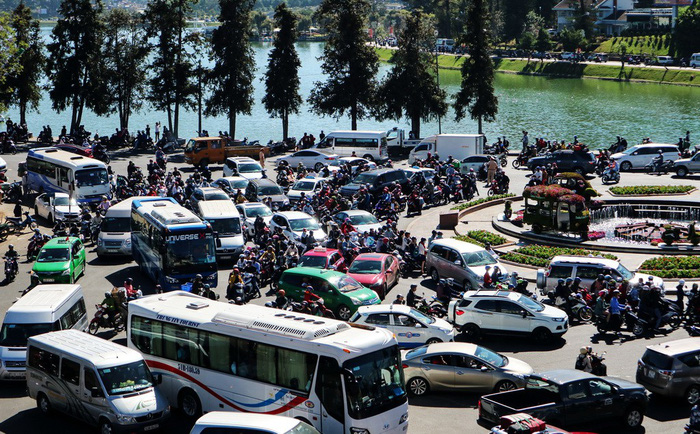 A Vietnamese expert has pointed out several causes of and potential solutions to serious congestion and overcrowding in the famous tourist city of Da Lat, a situation that was unprecedented in the past.

Dr. Ngo Viet Nam Son, an architect who previously contributed to Da Lat’s future development plan, has voiced his opinions regarding the increasingly serious problem in the tourist hub.

Located in the Central Highlands province of Lam Dong, Da Lat is dubbed the ‘city of flowers,’ famous for its year-round cool atmosphere and scenic natural landscapes.

As of 2017, the city was home to 300,000 local residents, and welcomed approximately five million visitors, Dr. Son told Tuoi Tre (Youth) newspaper during an exclusive interview.

Da Lat still has plenty of room for more people, the architect remarked, adding that it can house up to 700,000 citizens and welcome 10 million tourists every year, in accordance with a previous development plan established by French experts.

Overcrowding mainly occurs in the downtown area, which is referred to as the Hoa Binh area, where there are a large number of constructions, services, and vehicles, Son assessed.

It is incorrect for urban planners to determine Hoa Binh as the city center, Son continued, adding that the zone should only be a section of a much larger downtown area.

According to the expert, Da Lat’s center should be expanded to the iconic Xuan Huong Lake and the surrounding neighborhoods, which will help relieve pressure on the Hoa Binh area.

It is impossible for Da Lat to become another Ho Chi Minh City as their characteristics are very different to each other.

“The natural features of Da Lat, including its green trees and lakes, have to be preserved,” Son asserted.

Public transportation is also a good solution to the increasingly congested city, the expert suggested.

A system of public transport can be established to carry visitors along downtown streets, he elaborated.

Local authorities have recently demanded that buildings in Da Lat only have three to five stories, Son stated, considering that the regulation needs to be more specific.

There are many hills and slopes across the city, thus different height limits should be applied to different locations based on different altitudes.

The number of buildings must also be reconsidered in each neighborhood to make sure that there is enough space for green trees, he added.

Da Lat’s tourism growth has reached 14 percent per annum. The sector’s revenue in 2017 was recorded at VND9 trillion (US$395.4 million).

Almost all hotels in the city are located in its downtown area.