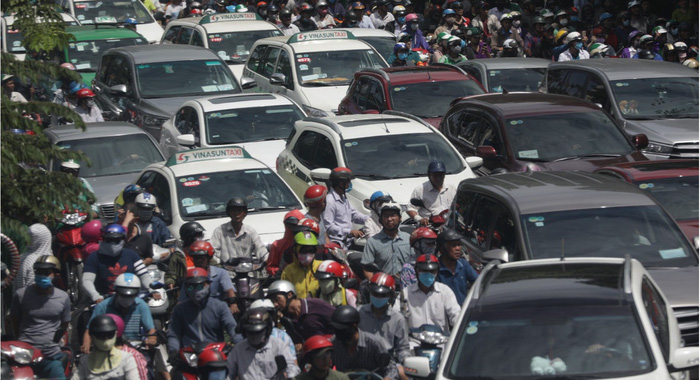 Thousands assembled in Vietnamese localities on Sunday to show disagreement as to a draft law on developing new special economic zones that they fear will pose risks to national security, causing road blockage and delaying flights.

Vietnam has plans to open three special administrative and economic zones that offer investors greater incentives and fewer restrictions than available in the country at present, at a total cost of US$69.16 billion.

A government-drafted law on the special zones, which was submitted to the lawmaking National Assembly last month for approval, has since sparked concerns over an article allowing potential foreign investors to lease land in the zones for up to 99 years under special circumstances.

On Sunday, thousands gathered in different areas in Hanoi, Ho Chi Minh City and other provinces and cities across Vietnam to voice their objection to the long-term land lease, which they feared would pose a serious threat to national security, calling for the government and legislature to reconsider the bill.

The gatherings occurred despite a pledgelast week by Vietnamese Prime Minister that the government would listen to feedback from the public and make “suitable reductions” to the land lease period, although he did not say for how long.

The government said on Saturday that it had asked the National Assembly to delay a vote on the draft law, which had been scheduled for this week, to allow for more research on the legislation and stressed that there would be no more circumstances in which a 99-year land lease would be allowable under the revised bill.

Nevertheless, opponents of the draft law took to the streets in order to speak out against the legislation, causing heavy traffic congestion.

In Ho Chi Minh City, roads leading to Tan Son Nhat International Airport were occupied by the crowds, causing flight passengers to abandon their vehicles and proceed to the airport on foot.

Some flights were delayed, while others departed with vacant seats belonging to passengers who could not make it out of the traffic jams, airline representatives told Tuoi Tre (Youth) newspaper.

In the south-central province of Binh Thuan, a crowd of thousands marched on National Highway 1, blocking passing vehicles.

Rocks were hurled at police officers and authorities’ vehicles as the march lasted well into the evening, causing kilometers-long congestion on the lifeline road.

An angry mob forced their way into the headquarters of the Binh Thuan People’s Committee and caused destruction to public properties, prompting police to use water cannons to disperse the crowd.

An angry mob breaks into the headquarters of the People’s Committee of Binh Thuan Province in south-central Vietnam on June 10, 2018. Clip: Tuoi Tre