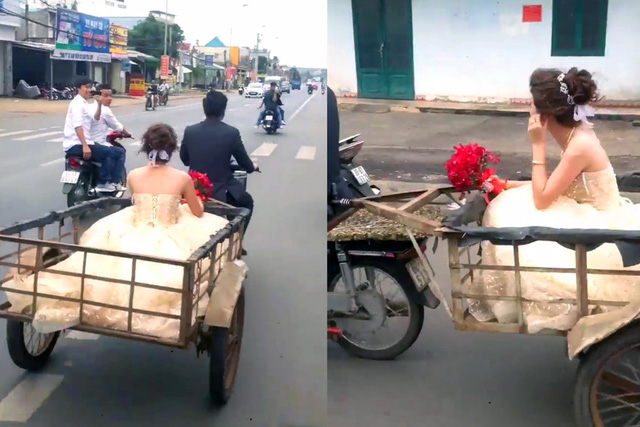 A viral video has surfaced of a formally dressed man carrying his supposed bride on a motorcycle trailer along a highway in southern Vietnam, a strange spectacle that drew mixed reactions.

In the 38-second footage posted on Facebook, an unhelmeted man donning a black suit but no helmet was riding a motorbike while a smiling, bouquet-holding woman believed to be his bride was sitting behind in an unadorned trailer on National Route 20 in Thong Nhat District of Dong Nai, a neighbor of Ho Chi Minh City.

Accompanying the couple were a dozen men on motorcycles, some of whom were yelling along the roadway, and all were wearing no helmets – a behavior that may earn them a fine of VND100,000-200,000 ($4.4-8.8) each in accordance with Vietnamese law.

A man carries a supposed bride in a trailer in Dong Nai Province, Vietnam, in this video from Facebook.

The video was viewed thousands of times and shared about 1,000 times, and received hundreds of comments, most of which disapproved of the men’s breach of traffic regulations.

“It’s fun but that looked dangerous as these guys weren’t wearing any helmets on the national road,” a comment read.

“It’s exciting. But the fun lessened because the whole pack of guys behind were running in the wrong lane, having no helmets on and shouting loudly like this,” another said.

“What a bunch trying to be impressive! Get ready to have a visit to the police station for putting on no helmets and driving in the wrong lane,” another viewer said.

Police were identifying the men in the video before bringing them in for questioning, an official in Dong Nai told Tuoi Tre (Youth) newspaper on Tuesday.