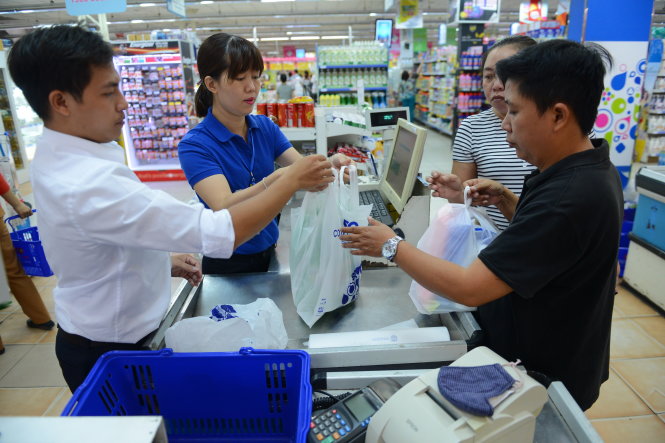 It is not uncommon to see shoppers ask for plastic bags at supermarkets and stores in Vietnam; what is worse is that they can get as many as they want for no surcharge.

Free, easy to get, and convenient to use are among the most common excuses for many Vietnamese when asked about their habit of using disposable plastic bags, one of the main causes of pollution.

‘A habit that is hard to change’

In Vietnam, it is also hard to see people coming to supermarkets with their own shopping bags, thanks to the ‘tradition’ that free plastic bags are always available at cashier counters.

In most supermarkets, rolls of plastic for wrapping are also placed at the fruit and vegetable section, and shoppers can take as many as they want.

“I often stop by the supermarket to buy food after work, so I never bring my own shopping bag,” 42-year-old shopper Cam Hong said.

“I know we have to limit plastic bag use to protect the environment but it’s hard to change a habit,” she added.

Meanwhile, 23-year-old Diem My expressed her dismay seeing attendants at supermarkets provide too many plastic bags for their customers.

“It is really wasteful when the attendants use three to four plastic bags to store items that can well fit into one single bag,” she said.

Thuy Tien, a Vietnamese student in Canada, shared that people in the North American country often bring their own shopping bags and those who do not have to pay five cents for a plastic bag.

“At first, I agreed to pay for the plastic bags as I was not accustomed to bringing my own shopping bag,” she said.

“But I soon had to change as this really cost me a great deal just to stick with the habit.”

“People are more willing to change something that hits their pocket,” she concluded.

According to 2016 statistics by the Ministry of Natural Resources and Environment, Ho Chi Minh City generated around 80 metric tons of plastic bags a day.

In 2013, the Vietnamese prime minister approved a plan to reduce the use of plastic bags, which are hard to decompose, at supermarkets and trade centers by 65 percent, as well as 50 percent of the items at local markets by 2020.

During the past years, Ho Chi Minh City has implemented campaigns with the hope of raising people’s awareness of the issue.

The initiatives include organizing the ‘Green Living Day’ to educate people about the harm of plastic, making videos to deliver messages about plastic waste, providing eco-friendly bags to shoppers, as well as holding contests calling on people to reduce disposable plastic bags.