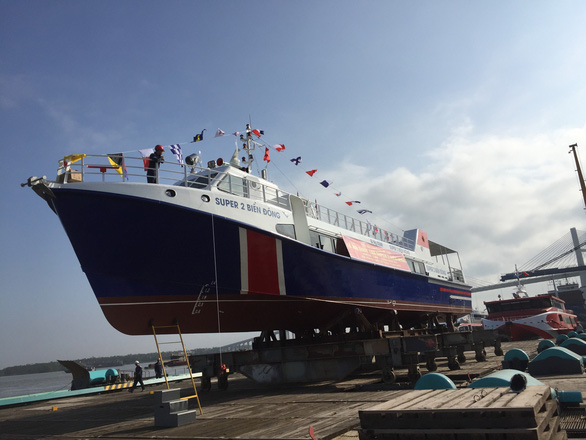 A new high-speed tourist boat tasked with ferrying passengers to Ly Son Island off Quang Ngai Province in central Vietnam was launched on Saturday, offering visitors a high-end travel experience to one of the country’s most well-preserved coral islands.

The boat, constructed by a military-owned shipbuilder on a contract with Bien Dong Company which runs daily ferries to Ly Son, is the most modern of its kind to have ever operated the route.

It is the second new ship to be launched this year to replace Bien Dong Company’s old fleet, which it plans to retire for the better service of customers.

The ship, named Super 2 Bien Dong, is built of an aluminum alloy with twin engines imported from the U.S., boasting a combined 2,600 horsepower.

It can cruise at an average speed of 35 nautical miles per hour, cutting the time it takes to travel from Sa Ky Seaport in Quang Ngai to Ly Son Island by half, or from more than one hour down to 30 minutes.

The boat is installed with a total of 150 passenger seats with safety features meeting international maritime safety standards.

“Most ferry boats to Ly Son are old, so we want to give the experience of traveling to the island a facelift and bring the island closer to the mainland,” Xem said.

Around 30 kilometers off Quang Ngai, Ly Son Island is home to the Ly Son Marine Reserve and the Binh Chau Global Geopark, hosting one of the country’s most well-preserved coral reefs.

The island is also famous for its native species of garlic, the Ly Son garlic, which is superior in taste and cannot be grown elsewhere in the country.