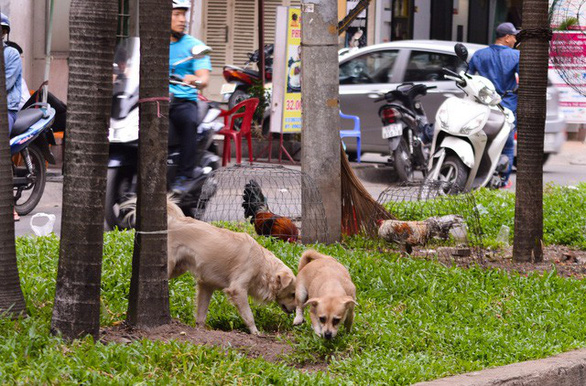 Authorities in the central Vietnamese city of Da Nang will start requiring local residents to register their pet dogs and cats next year for better rabies control, while those in Hanoi have proposed that local dogs be monitored via microchips.

The Da Nang People’s Committee confirmed on Tuesday they had announced a project on rabies control among pets, in an effort to completely eliminate the disease across the city.

Starting from 2019, all ward-level administrations are expected to keep a log of all pet dogs and cats in the central hub.

In order for this to happen, owners will be required to register their pets with the People’s Committees of the wards they live in.

They will be responsible for keeping their animals at their homes, ensure environmental hygiene, and prevent their pets from annoying other residents.

Pets should be wearing a muzzle or be leashed when being taken outside of their house.

Effort will be exerted to ensure more than 90 percent of the pets in Da Nang are vaccinated against rabies within next year. The figure will be raised to 95 percent by 2020.

As part of the scheme, transporting and slaughtering dogs and cats infected with rabies will be prohibited.

In addition, specialized teams will be tasked with capturing stray dogs and rabies-infected animals.

In related news, the Hanoi Department of Veterinary Medicine has recently proposed that dogs owned by local residents be monitored via a microchip.

According to Nguyen Ngoc Son, head of the department, the agency will coordinate with two foreign canine protection organizations to formulate a detailed plan.

“We want to follow in the footsteps of several other countries. The chip will be implanted inside the animals or inserted into their collars,” Son explained.

This will help authorities keep track of the dogs’ name, age, location, as well as check whether they have been vaccinated.

The plan will be funded by the private sector, Son said, adding that it will not be mandatory.

“We will just encourage local dog owners to join the program,” he stated.

The detailed plan is expected to be submitted to the municipal People’s Committee for approval in mid-2019.