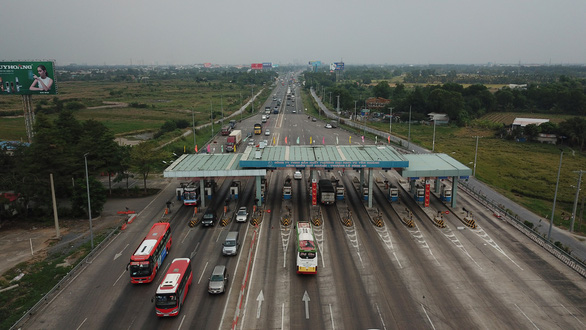 An expressway connecting Ho Chi Minh City and the Mekong Delta has become overcrowded with big trucks after toll collection along the route was temporarily suspended from the beginning of this year, leaving drivers vexed as they just fail to travel at the maximum speed allowed.

Stretching nearly 62 kilometers, the Ho Chi Minh City-Trung Luong Expressway is considered a vital route as it links the southern metropolis with Tien Giang Province and the Mekong Delta region in general.

Drivers were previously required to pay a toll to travel on this road, while those who did not want to do so could take a detour on National Highway 1.

Yen Khanh Trade Production and Service Company won the contract to collect the fee from 2013 to 2018.

The five-year deal expired on January 1 and the management of the expressway was transferred to the Directorate for Roads of Vietnam (DRVN), while the toll collection was put on a temporary halt.

The DRVN would fix and upgrade the toll stations as well as finish a report on how to operate the tollgates in the future. It is unclear when toll collection will be resumed.

About 45,000 to 48,000 vehicles traveled on the expressway every day from January 1 to 14, up 18 to 26 percent compared to the normal volume in previous years, said Nguyen Van Thanh, a DRVN official.

According to the observation of Tuoi Tre (Youth) newspaper reporters on January 10, the route was filled with vehicles, including large trailer trucks that used to take the detour to avoid toll payment.

While the maximum speed is 120km per hour, these trucks could travel at only 60 to 70km per hour, making it difficult for cars and smaller trucks to reach the highest speed.

Some drivers had no choice but to travel on the hard shoulder to pass the snail-paced container trucks.

“These large trucks travel very slowly and occupy almost every lane. We are quite upset that they are not fined by traffic police,” said Nguyen Minh Hong, a driver of FUTA Bus Lines.

Other passenger bus drivers also complained that their average journey along the expressway has become at least 20 minutes longer.

According to Thanh, the DRVN official, the minimum speed limit has been lowered from 80 to 60km per hour due to the increase in the volume of vehicles on the expressway.

The speed limit, however, does vary in each lane, thus drivers should fully understand the regulations when entering the route.

“We will take certain measures to raise awareness of the situation among commuters and coordinate with relevant units to penalize those who violate minimum and maximum speed limits,” Thanh elaborated.