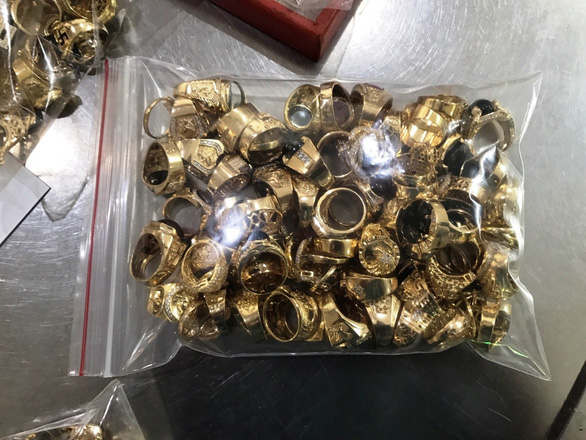 Employee steals 14.3kg of gold from jewelry shop in Vietnam

A man who stole 14.3kg of gold over six years from a jewelry shop where he works in the central Vietnamese city of Hoi An was caught trying to sell the lot for money this week.

Nguyen Duc Tuan, 27, has been working for a big jewelry shop in Hoi An since 2012, where he is left in charge of looking over the gold jewelry displays.

On Tuesday, Tuan and his brother brought 14.3 kilograms of gold jewelry, including rings, necklaces and bracelets worth more than VND5 billion (US$215,000), to a gold shop in Da Nang, around 30km north of Hoi An, to try and sell them for money.

Finding them suspicious, the gold shop owner informed local police officers, who came and escorted the brothers to a police station for questioning.

After trying unsuccessfully to hide the truth, the duo eventually confessed to having stolen the gold items from the jewelry shop where Tuan works.

According to Tuan, over six years between 2012 and 2018, he had secretly stolen a small amount of gold every day from the shop so that his behavior would go unnoticed.

Tuan hid the gold away and waited for a chance to sell the properties for money.

The criminal police division of Quang Nam Province Police said on Friday evening they had made the urgent arrest of Tuan for investigation into his alleged theft.