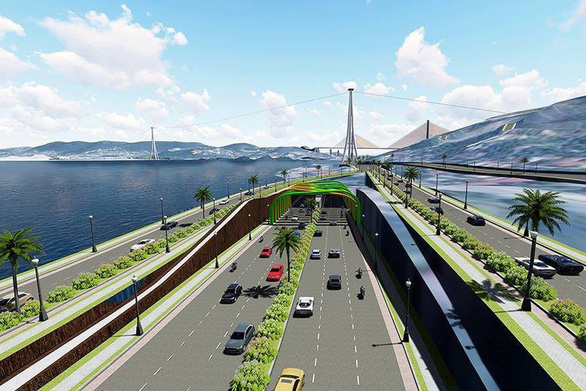 The northern Vietnamese province of Quang Ninh is seeking to build a 2.75-kilometer undersea tunnel “on the doorstep” of the coastal locality’s famed Ha Long Bay, a UNESCO World Heritage Site.

The Quang Ninh administration has submitted the proposal to develop a submarine passage through Cua Luc Bay, located in the inner area of the provincial capital of Ha Long, to Vietnam’s Prime Minister Nguyen Xuan Phuc for approval.

The idea of building the Cua Luc undersea tunnel in Ha Long stemmed from the negative impacts the annual storm season leaves on the locality, Tran Van Hung, director of the provincial Department of Planning and Investment, told Tuoi Tre (Youth) newspaper on Monday.

Whenever a storm hits Quang Ninh, people are often not allowed to travel on Bai Chay Bridge, the only route for vehicles to travel between the two sides of the narrow Cua Luc Bay, for safety reasons, according to the departmental head.

As the suspended traffic would affect the lives of local residents, the Cua Luc underwater tunnel will help ensure traffic connectivity even in foul weather, he added.

The undersea tunnel is designed to stretch 2.75 kilometers, measuring 4.75 meters in height and 32.6 meters in width, according to the proposition.

It is expected to have six lanes with an allowed speed of 60kph and is capable of withstanding storms of level seven.

If approved, the Cua Luc tunnel will become the first undersea road tunnel in Vietnam.

Hung said construction is expected to begin this year and be complete by 2024, at a cost of VND9,700 billion (US$417.1 million) to be funded by the local budget.

The Quang Ninh administration hopes that the undersea tunnel will help ease pressure on the Bai Chay Bridge, and connect the tourist area to the west of Ha Long City with the municipal administrative area to the east.

Three consulting companies, namely Nippon Koei, FECON and Transport Engineering Design Inc., have presented their ideas on how the tunnel might be developed.

The firms suggested using either the tunnel boring machine or immersed tunneling method, widely employed by many countries for safety and effectiveness reasons.

The Cua Luc tunnel project was included in Quang Ninh’s master plan for transport infrastructure by 2020 and considered a top priority for development, the official Vietnam News Agency quoted Vu Van Khanh, director of the provincial transport department, as saying.