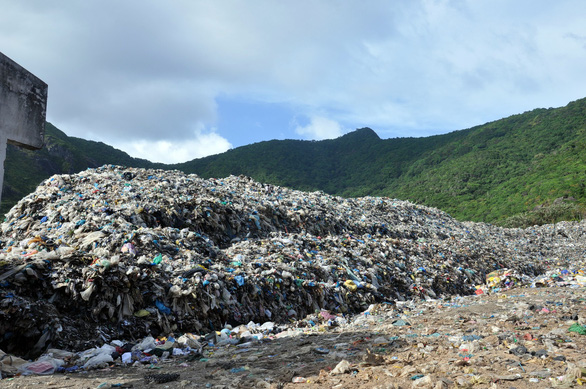 Vietnamese islands under threat from lack of garbage treatment

Garbage is both piling up on and floating around several islands in Vietnam, as local authorities are still scratching their heads trying to find solutions to household waste treatment on the localities.

The only dumpsite on Con Dao Island is surrounded by mountains on three sides, with the remaining facing the Bai Nhat beach.

The 4,000-square-meter garbage dump has been receiving trash for the last 20 years, with only about 300 square meters of space left in its capacity, according to the Con Dao District administration.

Around 15 metric tons of trash of all kinds, from the easily biodegradable garbage to plastic bottles and plastics, are delivered to the site on a daily basis, but only about five metric tons of them are handled.

As a result, up to 70,000 metric tons of untreated garbage still remains at the landfill, sending stinking smells and leachate to nearby streets and even to Bai Nhue, one of the tourist’s favorite beaches on the island.

Massive heaps of waste also pile up in the vicinity of Con Dao Prison, a historical site commemorating the escape of 198 Vietnamese patriots imprisoned during French colonial period in 1952.

Therefore, the Con Dao administration has recently submitted a plan to transport untreated waste to the mainland for treatment in the province’s Phu My Town.

The garbage is expected to be compressed into 450kg bales before being loaded onto ships.

Over VND35 billion (US$1.51 million) is expected to be earmarked for the project, according to the provincial deputy chairman Le Tuan Quoc.

The rising tourist numbers to Phu Quoc Island, which covers nearly 590 square kilometers with an estimated population of over 100,000 people, come with increased amount of daily waste.

In 2014, it was estimated that residents and tourists on Phu Quoc released about 140 metric tons of garbage every day. The current figure is about 200 metric tons per day.

There had been no garbage treatment facility on the island, but only two temporary dumps in Cua Can Commune and An Thoi Town, until the second half of 2017, when a waste treatment plant spanning about ten hectares was built in Ham Ninh Commune.

However, the facility, named Bai Bon, had to undergo a test run for more than 1.5 years, and sometimes had to have its operations temporarily suspended for equipment addition.

The Bai Bon garbage plant currently receives about 130 tons of waste per day.

In the near future, an additional waste treatment plant of about seven hectares will be established in Duong To Commune, while the two rubbish ‘mountains’ at the temporary dumps in Cua Can and An Thoi will be cremated under a VND40-billion ($1.72 million) project funded by an enterprise in order to avoid environmental pollution.

Besides the planned facility on Phu Quoc, in Kien Giang, there are only two incinerators, with capacities from about two to 2.5 tons a day, on Tien Hai Island Commune in Ha Tien Town and Cu Tron Island off Kien Hai District.

Meanwhile, the first thing to welcome visitors to several other islands off Kien Hai, which are attractive destinations for tourists, are garbage.

While Vietnamese islands are in dire need of waste treatment plants, the problem is expected to persist as the private sector does not seem to be interested in investing in this field, according to experts.

Private investors usually face difficulties in technology and financing, while profit from the sector is not attractive enough.