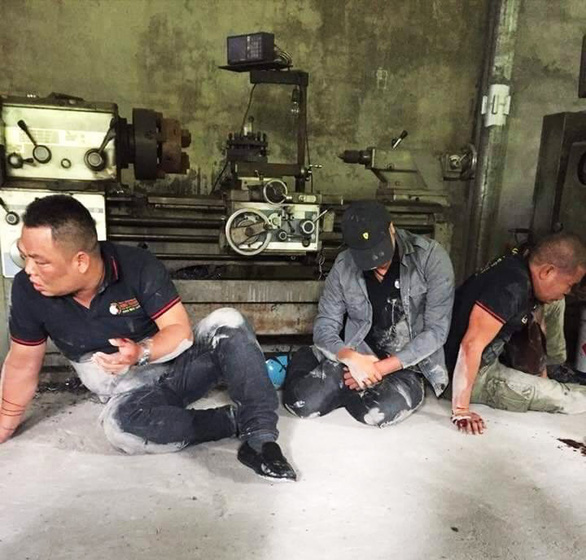 Police in the northern Vietnamese province of Quang Ninh have apprehended a former naval commando for beating up a group of debt collectors who were hired to retrieve a huge overdue payment from him last weekend.

An urgent arrest warrant was issued for Do Duc Lan, 45, who resides in Yen Tho Commune, Dong Trieu Town, the town police chief Nguyen Thanh Son said on Monday.

According to preliminary investigation, Lan has owed Thanh, a man residing in Dong Trieu Town’s Mao Khe Ward, VND400 million (US$17,200) since 2014.

Thanh has recently run across an ad of Hung Thinh Co., a Ho Chi Minh City-based company which provides legal debt collection service, on the Internet and signed a contract to have the firm collect the debt for him.

On Saturday, five men wearing Hung Thinh Co. uniforms met Lan at his mechanics workshop in Yen Tho Commune, after having presented their debt collection permit to the local police.

The debt collectors and debtor apparently got into an argument that quickly turned violent, with Lan, a former naval commando, beating three of the five men to a pulp. The other two debt collectors managed to run away and report the incident to Yen Tho police officers.

Lan also had his “teaching the debt collectors a lesson” filmed, with the footage later uploaded on Facebook.

Following the beating, the three men were also made to get on their knees and keep their faces close to the ground, as seen in the video.

One of the men was seen trying to wipe his bloody nose with a piece of tissue.

Two of the debt collectors were taken to hospital for emergency treatment as police arrived at the scene to handle the situation.

Police had summoned the individuals involved in the case for investigation before the arrest warrant was made for Lan.