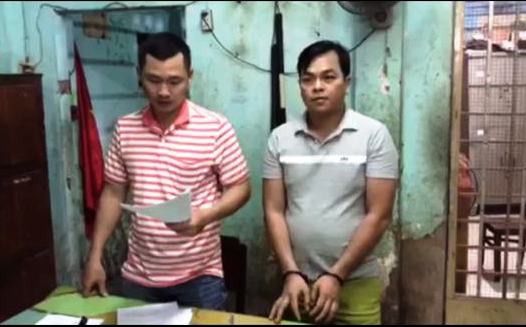 A Ho Chi Minh City resident who is dubbed Vietnam’s ‘gold man’ has been arrested along with his 11 accomplices for organizing illegal drug use in the southern metropolis.

The municipal police department said on Tuesday they had initiated legal proceedings against the ‘gold man’ Tran Ngoc Phuc, his younger brother Tran Ngoc Tai, and ten other people involved in the case.

Phuc, a.k.a. Phuc XO, has been held in custody since April 13 to assist the investigation but his official arrest warrant was issued today, after police had gather sufficient evidence, according to officers.

On the night of April 10, a team of officers swooped on Phuc’s XO Karaoke parlor on Truong Chinh Street in District 12 and discovered that many customers appeared to be high on drugs.

Drug testing of nearly 100 people present at the venue showed that 39 were under the influence of narcotics.

Two employees and a customer were also caught carrying drugs.

A comprehensive search was conducted at the karaoke bar on the following evening to further assist police in their investigation.

The probe later revealed that Phuc had been directing his staff to allow their customers to bring and consume narcotics inside his karaoke parlor.

The parlor also provided specialized tools needed for drug use and had many female employees wear revealing outfits, serve beer, and consume the stimulant with their customers.

Tai was found storing drugs at his house.

Phuc XO’s claim to fame is videos and photos posted on social media, showing him wearing a large amount of gold.

He has been seen with multiple gold-plated high-capacity motorbikes and an automobile covered in gold.

The man recently attracted media attention after wearing a tailor-made golden cap which he claimed to cost more than VND1.8 billion (US$77,400) to make.

However, several domestic media sources said the gold was all fake, a trick Phuc employed to attract attention and promote his karaoke venue.