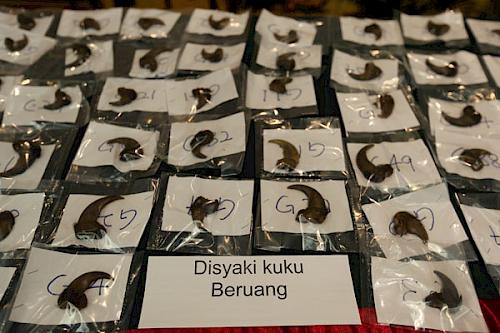 Two Vietnamese nationals convicted of illegal possession of animal parts from threatened and protected species were each handed a fine of 1.56 million ringgits (US$390,000) and two-year jail sentences by a court in Malaysia’s Terengganu State on Wednesday.

It is the first time in Malaysia's history a fine of more than MYR1 million has been issued for a wildlife crime.

The two men, who were caught in a national park last month with the animal parts and snares, were convicted on Wednesday of 20 separate charges under the Wildlife Conservation Act 2010 by the Kuala Terengganu Sessions Court, wildlife conservation NGO Traffic reported the same day.

Traffic is a UK-based charity which works to promote sustainable trade in wild animals and plants “in the context of both biodiversity conservation," according to its official website.

The two perpetrators were found with 141 individual animal parts from Sumatran serows, leopards, Malayan tapirs, sun bears, Asiatic golden cats, and wild boars when officers from Malaysia’s Wildlife and National Parks Department arrested them on the east coast of Peninsular Malaysia on April 15.

Hoang Van Viet, 29, and Nguyen Van Thiet, 26, both pleaded guilty to charges under four sections of the law for illegal use of snares and unlawful possession of Totally Protected species as well as Protected ones.

The duo faces a further 16 years of jail if they fail to pay the fines, Traffic reports.

This is the second case brought to trial in recent months that has involved Vietnamese nationals caught poaching in Malaysian forests.

He was found to be in illegal possession of 273 wildlife parts of species including the tiger, leopard, clouded leopard, sun bear, and sambar deer.

All except the sambar deer are classified as Totally Protected species under the Malaysian law.

Another Vietnamese national, Ho Van Kien, was arrested on July 4 last year on six charges under the same law for his possession of one full tiger skin, a partial tiger skin, one leopard claw, a sun bear claw, 150 grams of tiger meat, and 21.15 kilograms of wild boar meat.