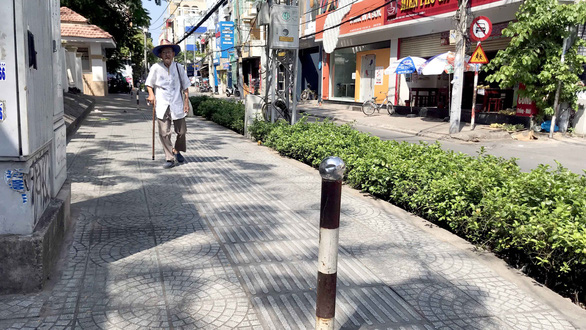 In Ho Chi Minh City, blind people who hope to benefit from the tactile paving along many of the city’s streets instead find themselves dodging motorbikes, electricity boxes, trees, and manholes.

Tactile paving, also called detectable warning surfaces, is a system of textured ground surface indicators found on footpaths, stair, train station platforms, and other public spaces meant to assist visually impaired pedestrians in finding their way and warning of potentially dangerous areas such as the edge of a train platform or an intersection.

However, the tactile paving installed on many of the footpaths in Ho Chi Minh City has proven useless against the massive amount of obstacles blocking pedestrian walkways.

On Pham Van Dong Street in Thu Duc District, where tactile paving has been installed to help the local blind community navigate the neighborhood, electric boxes and the encroachment of local business which use the sidewalk to sell goods or park motorbikes has made it nearly impossible for non-visually impaired people, let alone the blind, to navigate the path.

Likewise, on Ly Chinh Thang Street in District 3, a large tree blocks the sidewalk while the construction workers on Nguyen Van Troi Street in the same district have obstructed the walkway with a large pile of sand.

Hoang, a lottery ticket seller, shared that textured ground surface indicators do nothing to help him navigate the city.

“We make our way using our gut instincts, sticks, and our ears,” Hoang said.

According to the Ho Chi Minh City Department of Transport, sidewalks throughout the city, especially those in crowded areas of the southern metropolis, are misused and often obstructed, creating difficulties for local pedestrians and tarnishing the cityscape.

As an immediate solution, the municipal transport department said it will increase street patrols to hand out penalties for illegal encroachment by street vendors, vehicles, and construction work which impedes the city’s sidewalks.

“At the same time, we will apply a system of security cameras to help us take immediate action in cases of pavement encroachment,” a representative of the transport department told Tuoi Tre (Youth) newspaper.

In the long term, the department said it will consider adjustments for current administrative regulations on pavement usage, upgrade, and renovation.