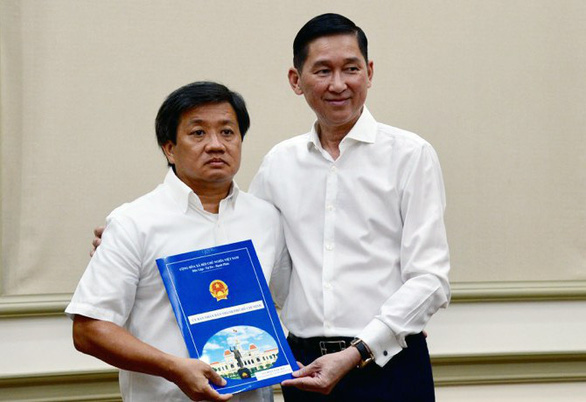 Doan Ngoc Hai, known for his signature ‘sidewalk clearing’ campaign in Ho Chi Minh City in 2017, has been assigned a new job at a state-run corporation, albeit against his personal aspirations.

Hai, former deputy chairman of District 1 in Ho Chi Minh City, received a decision on his transfer from city leaders at a ceremony on Tuesday.

He now serves as deputy general director of the Saigon Construction Corporation (SGCC), which is owned by the administration of Ho Chi Minh City.

Founded in 1996, SGCC is tasked with developing and providing consultancy on residential and infrastructure projects.

One of its notable projects include a branch of Vietnam’s Cho Ray Hospital in the Cambodian capital of Phnom Penh.

Speaking at Tuesday’s ceremony after accepting his new job, Hai said he had discussed with city leaders the new position on many occasions.

“I was very clear about my personal aspirations, but apparently they haven’t been accepted or responded to,” Hai said.

“I don’t have the qualifications for my new job, but as a Party member it is my responsibility to follow [the Party organ’s appointment],” he added.

Hai, 50, came into the media spotlight in January 2017 when he first started his ‘sidewalk reclamation’ effort in District 1, with a series of assertive measures to remove anything that blocked the footways.

A year later, he tendered his resignation from all positions for failing to prevent the sidewalks from being occupied again, but he retracted the letter in May 2018 after reconsideration.

Hai remained deputy chairman of District 1 until Tuesday’s appointment, having taken the helm in some of the downtown district’s notable campaigns including a fight against illegal fishing along the iconic Nhieu Loc-Thi Nghe Canal and crackdowns on stray dogs.

“Hai has always been a man of great energy at work, and I have no doubt he will continue to prove so in the new job with his ability and experience,” Ho Chi Minh City deputy chairman Tran Vinh Tuyen said at Tuesday’s ceremony.