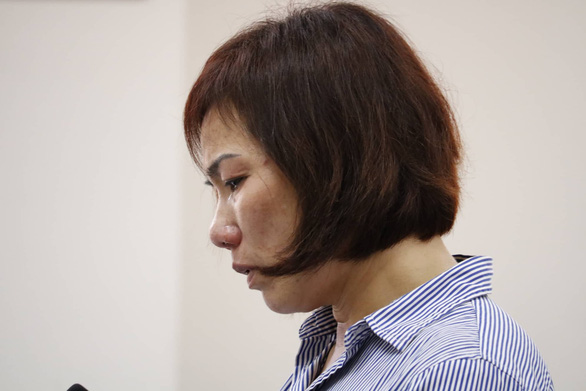 A 47-year-old woman has been sentenced to three years and six months behind bars for causing a drink-driving crash that killed one and injured five people in Ho Chi Minh City last October.

Nguyen Thi Nga, a resident in District 12, stood her trial at the People’s Court in Binh Thanh District on Monday.

She was charged for “violating regulations on road safety,” an offense punishable by three to ten years in prison under Article 260 of the Penal Code.

The court condemned the defendant to three and a half years in prison, given the mitigating factors that it was a first-time offense and that she had compensated for the damage caused.

According to the indictment, Nga was driving her BMW car along Dien Bien Phu Street in Binh Thanh District on the night of October 21, 2018 when she crashed into a group of motorcyclists stopping at a red light at the Hang Xanh intersection.

The indictment also showed that Nga never had a driver’s license.

During the trial, Nga claimed she had attended a birthday party and consumed alcohol prior to the crash.

She admitted it was wrong to drive the vehicle without a license.

The car belongs to her company and was often driven by a chauffeur, the defendant continued, adding that the driver took a day off that day, thus she decided to drive home by herself.

Nga also noted she was taking a driving course to apply for a license.

She attributed the accident to one of her high heels being stuck to the gas pedal, which caused her to panic and be unable to stop the automobile.

According to the judge, Nga and her family have spent nearly VND2 billion (US$86,000) on recompensing the victims.

All of the injured victims and the family of the deceased had submitted documents asking the court to dismiss the case.

However, the judge asserted that Nga needs to be punished by the law, as the accident was very serious and resulted in terrible consequences.

Nga’s attorney requested that Nga be given a suspended sentence as her husband is battling cancer, while their child suffers from autism.

She also owed VND13 billion ($559,000) to local banks prior to the crash and had to borrow an extra amount to recompense the victims, so she needs to continue working to pay the debts, the lawyer claimed.