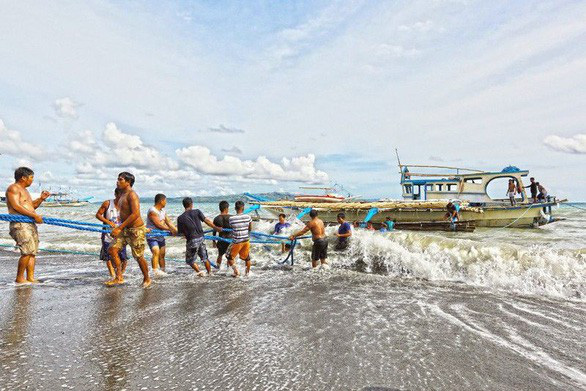 Vietnamese fishermen who helped save the crew of a Philippine ship that sank after being hit by a Chinese boat off Vietnam’s Truong Sa (Spratly) archipelago in the East Vietnam Sea on June 9 will be rewarded and publicly commended for their chivalry, local officials have said.

The Chinese ship hit a Filipino craft anchored near Reed Bank, part of Vietnam’s Truong Sa islands, causing it to sink and leaving 22 crewmen "to the mercy of the elements," Philippine defense secretary Delfin Lorenzana was quoted by AFP as saying in a statement on June 12.

The defense chief also thanked the crew of a Vietnamese fishing vessel in the vicinity which he said brought the Filipinos to safety.

The dramatic rescue was detailed in an article published on Saturday by the Philippines’ ABS-CBN News.

The Filipino fishermen had set off from Occidental Mindoro on May 29 and were on their last day before heading home when a speeding Chinese fishing vessel was coming their way, the news site reported.

Boat captain Junel Insigne said the Chinese fishing vessel, identified by Chinese authorities as Yuemaobinyu 42212, stopped for a while after plowing into the Filipino craft and flashed its lights.

"They saw that the boat was sinking and we're floating in the water," the captain was quoted by ABS-CBN News as saying.

Instead of rescuing the distressed fishermen, the Chinese fishing vessel maneuvered in reverse and rushed off, Insigne recalled.

"I thought they were going to help us, but they abandoned us instead."

While the crew was struggling to stay afloat, Insigne spotted a vessel some eight kilometers away and asked two of his crewmen to row a small boat to ask for help from the vessel.

It took the pair some two hours to reach the vessel, which they later found out to be manned by the Vietnamese.

The Vietnamese then came to aid the Filipino crew, rescued them and later gave them food, ABS-CBN News reported.

Asked how he knew of their nationality, Insigne said: "He said, ‘Vietnam? Philippines? Friends.’ That's why I knew they were from Vietnam."

The 22-man crew safely returned to their families on Friday night.

On Monday, the Department of Agriculture and Rural Development of the southern Vietnamese province of Tien Giang said it had identified the Vietnamese fishermen responsible for the rescue of the Filipino crew.

The Vietnamese vessel, TG -90983, is registered under the name of local fisherman Ngo Van Theng.

Theng has reported the incident to Vietnamese authorities. His vessel and crew remain at sea as their fishing expedition has not concluded, according to the provincial department.

Tien Giang deputy chairman Pham Anh Tuan told the press on Monday afternoon he had asked officials to propose appropriate rewards and commendations for the Vietnamese fishermen when they return home.